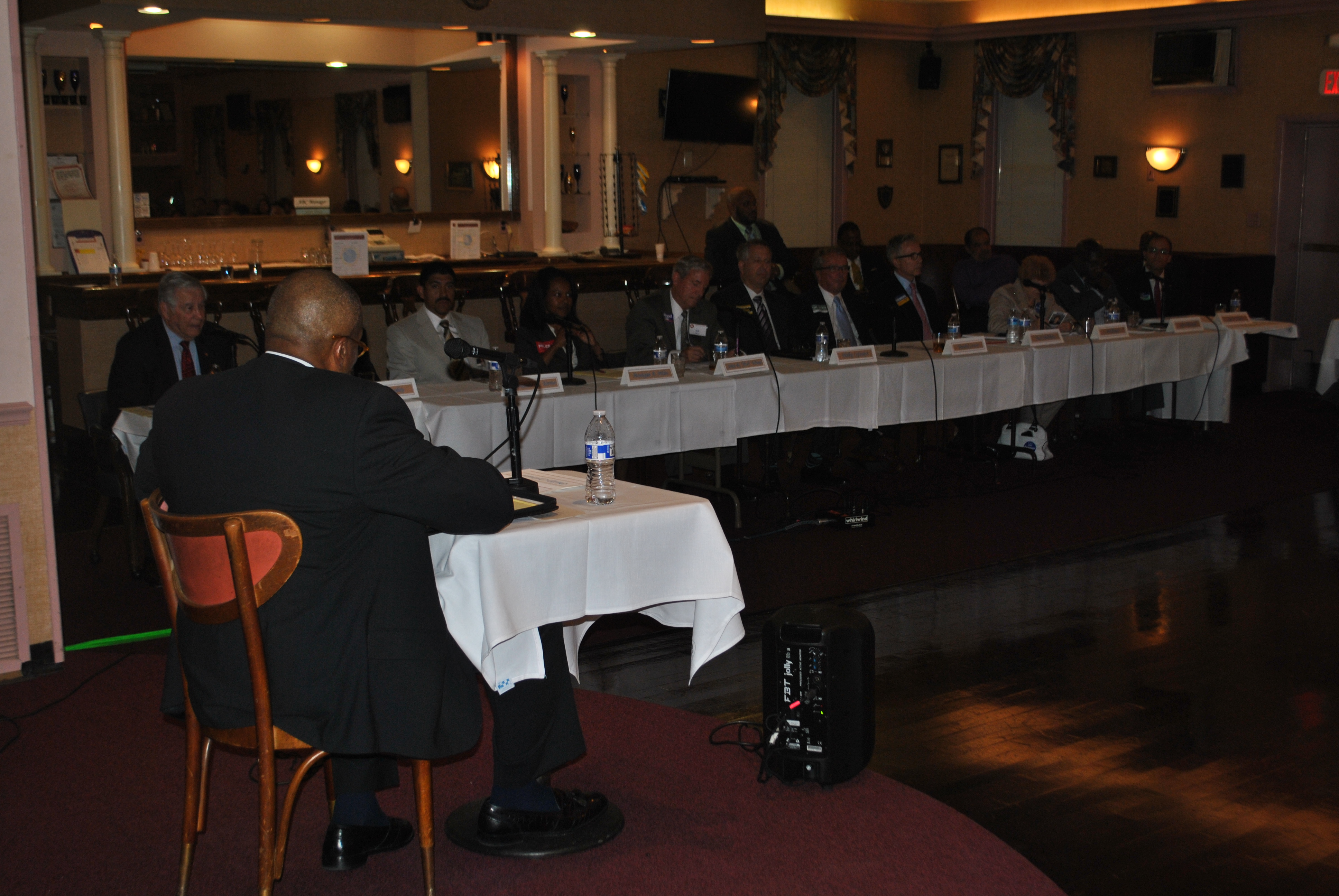 The 11 candidates running for city council this fall gathered for a forum Monday night at the city’s Departmental Progressive Club, and the battle lines became clear at the outset.

“There are three major services that citizens expect from their council: a strong safety net — that’s police and fire [services] — a solid infrastructure, like sewers, roads and the like, and good schools,” said Republican Townsend Van Fleet in the first of the candidates’ opening statements. “This [current] city council strikes out on all three.”

That was one of only a few acerbic moments of the evening. Billed as a forum — not a debate — the event was geared more toward candidates laying out their visions for Alexandria, rather than head-to-head policy discussions.

Although most candidates agreed on the principle that the city must aggressively explore a variety of innovative methods to expand affordable and workforce housing in the city, they distinguished themselves in two key areas: business and development, and the city’s debt.

Republican candidates by and large argued that the city should promote small business growth through the rollback of taxes and easing of regulations in order to ease the city’s recent budget struggles.

“When I’ve talked with business owners, I’m not hearing that they find Alexandria to be a business-friendly climate,” Wood said. “They’re frustrated by the regulations and the troubles associated with starting, opening and growing a business.”

“We need to educate small business owners, both already here and considering coming here, and let them know what resources are available,” Miles said. “And we should reduce the [city business licensing] tax to 1 cent below neighboring jurisdictions.”

“We need to get rid of that long business license application form,” said Torrez. “When you go to City Hall you end up going back and forth from department to department, wasting time.

“You might hear something from one inspector on one day, only for another inspector to say, ‘That’s not right,’ the next. We need uniformity and someone on council who understands how business works.”

Democrats, on the other hand, cited victories in attracting federal office tenants like the National Science Foundation and the U.S. Transportation Security Administration, which they said will both grow city coffers and spur more small business growth in the city. But they also acknowledged the need for a more diversified economic sector.

“We’re still far too dependent on federal spending,” said Wilson. “It’s going to be a challenging environment for budgets, but we recently finished up the business tax reform work group and want to implement those recommendations, because we can’t depend on residential taxpayers to pay for all of our services.”

“City council and staff have done a good job of maintaining the services that are meaningful and reflect the community’s values,” Smedberg said. “As far as expanding our economy, I think we have a lot momentum with the NSF and the TSA and we’ll soon see small businesses expanding with that. We will be helping them every step of the way.”

Later in the evening, the discussion moved to the city’s need to improve school capacity, which quickly exposed the fault lines among candidates on Alexandria’s debt.

“The essential functions of government are public safety and schools, and you have to deal with that before you can get to wish list items,” Miles said. “We currently spend 10 percent of our budget on debt service, while Arlington’s is only 4 percent.”

In Arlington County’s approved fiscal 2016 budget, the jurisdiction is slated to pay $59.9 million in debt service, 8.6 percent of its $698 million operating fund. Alexandria’s debt service for the same year — $65.7 million — represents 10.1 percent of the operating budget.

“This council has put us a half billion dollars in debt, and as a result they project that the tax rate will go up 21 percent over the next five years,” said Van Fleet. “[Redistricting] should help with capacity somewhat, but we’re projected to need to spend another $1 to 2 billion over the next 15 to 20 years [on schools]. The schools budget needs to be aligned with the city budget and coordination needs to improve.”

But Lovain and other incumbents argued much of the recent debt incurred on public infrastructure projects was the result of past councils neglecting the city’s needs.

“In recent years, we’ve been addressing an infrastructure investment deficit that dates back to the 1980s and 1990s,” Lovain said. “We have plans in place to deal with school capacity. There’s the Patrick Henry [Elementary School] reconstruction and we’re going to expand Minnie Howard.

“We’re doing our best to keep up with the growing enrollment.”

And Chapman argued in favor of looking for unconventional approaches to provide extra classrooms for students.

“We still have a ton of vacant office space,” he said. “Why not take some of that and make it into schools? And there’s a growing trend of employing public-private partnerships to modernize schools, because you can save a lot of tax dollars in the process.”

But Cefaratti argued that too much money is going toward improving school buildings rather than academics.

“There are far too many children not getting a good education,” he said. “We need to focus on education itself, not just buildings like Jefferson-Houston, which is a grandiose Taj Mahal.”