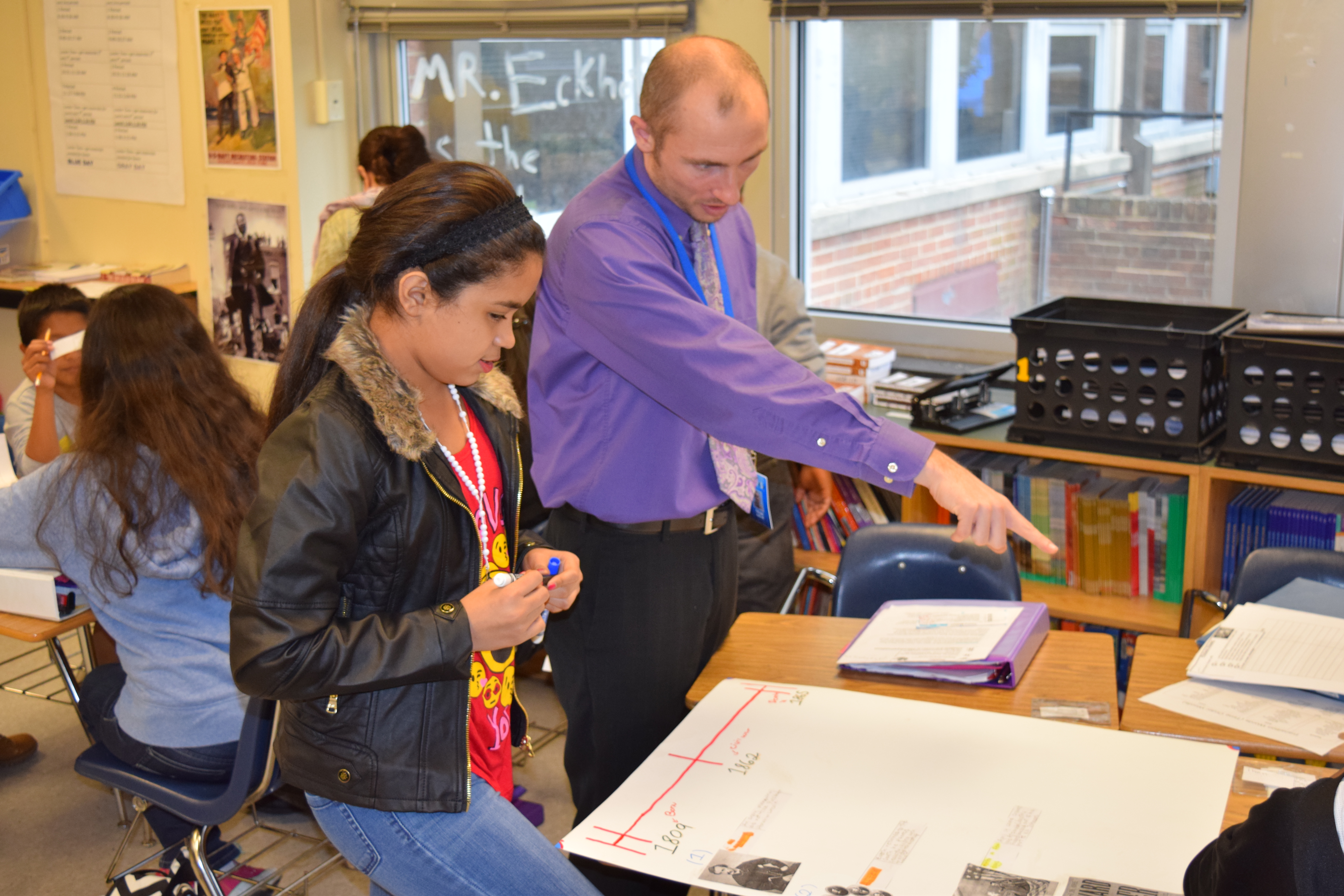 Walk down the corridors at Francis C. Hammond Middle School after the final bell of the day, and you will see students still in their classrooms, engaged in learning not only the content of their classes but also working on their mastery of the English language, thanks in large part to the new international academy, established at the start of the 2015-2016 school year.

The academy at Hammond is the first of its kind in the country to be set up at the middle school level by the Internationals Network for Public Schools, with 12 teachers joining counselor Katie Migliorini and coordinator Tim Brannon in educating around 160 students, a number Brannon said changes almost by the hour as new children are admitted.

Of those 160 students, about half speak Spanish as their first language, while the other half speaks 19 languages between them. A total of 27 countries are represented in the academy, with immigrants from El Salvador having the largest contingent, followed by Honduras, Guatemala, Ethiopia and Pakistan.

Students and their families are given the option of admission to the international academy or the more traditional English as a Second Language education after taking a home language survey. Students whose English skills are extremely basic up to those who are able to use the language socially but struggle with it in an academic setting all are eligible for admission.

Within the academy, students take English, math, social studies and science classes. In addition, students take physical education and an elective class, both of which are done with the general student body. The majority of learning is project-based, with instruction on content and language done in parallel.

“It’s the same curriculum they would receive in any other social studies or language arts classroom; however, it’s from a teacher who’s been specifically trained to teach language and content at the same time to students,” Brannon said. “Some of them, who are students who have the lowest reading scores, have reading intervention class, and a lot of those students have come to this country with limited formal education in their backgrounds.

“A lot of them read in their native language at a first grade level, so a lot of that is about developing — before we get to English — developing a little bit of fluency in their own language and then transferring those skills over to English so they can begin to comprehend what’s going on in their classes.”

The academy has already garnered national recognition, despite being open for just 10 weeks. Late last month it was named one of the 41 most innovative schools in the U.S. by Noodle Education, a New York-based company that helps students make decisions about their education. One of the key aspects has been integrating the academy with the rest of the school and ensuring it does not feel like a separate entity.

“Just like every student in the school does a science fair project, so will our students,” Brannon said. “In the past, the newcomer immigrants would not have participated in that, maybe, and our students will. We’re going to try to participate in History Day like the rest of the school.

“The instruction when you’re in the classroom will look a little bit different and we’ll be talking a lot more about language and seeing a lot more reading and writing in some of the classes, but we want them to feel part of the school, not just the academy.”

That integration follows the model of the international academy at T.C. Williams High School, which was the first in the country to be part of the school and not a separate entity. Brannon spent a year at T.C. preparing to take charge at Hammond, and those involved with the high school’s academy see enormous benefits from the continuity that a middle school academy will bring.

“If we have students that come in that still need the level of support that’s offered through the model, they have that continuity,” said Danielle Wierzbicki, international academy leader at T.C. “They understand the type of collaborative model and the type of project-based learning that we do and so when they come to the high school, they’ll already know all about that type of learning.

The program’s impact will become far more apparent in the near future as test scores and other data is gathered. For now, first-year Hammond principal Pierrette Hall says the introduction of the academy has made a big difference already in the school’s culture.

“It’s been great, because it’s given us an opportunity to look at how we structure our entire school,” Hall said. “We’ve been able to implement a team structure for ELL students based around [Sheltered Instruction Observation Protocol], which also lends itself to greater instructional learning and instructional strategies that kids need. It’s allowed us to provide a level of learning and service in a strategic way.”