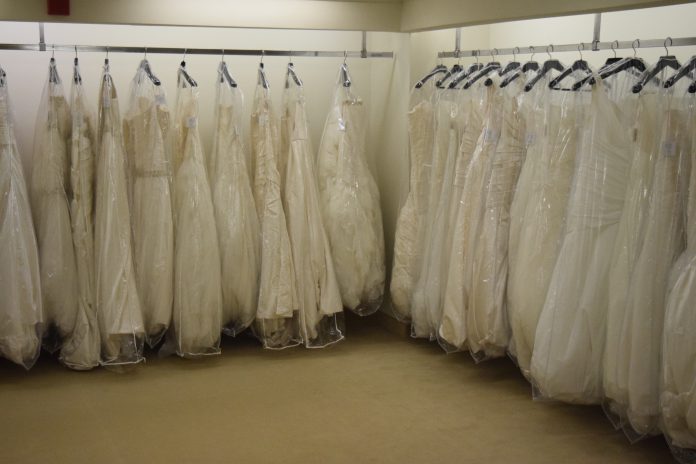 After several months away, Pamela Vito has returned to the bridal business in Old Town at her store Say Yes For Less, located at 106 N. Lee St.

The store replaces Hannelore’s of Olde Town, which had been a staple of the city’s small business community since the mid-1980s. Hannelore’s closed in January after the retirement of Vito and her mother Hannelore Karpinski, but the deal to sell its building fell through.

So Vito has returned with a new concept not seen before in the D.C. region. Instead of the traditional model of future brides trying on a sample dress then ordering a custom fit from the manufacturer, customers now can buy those sample gowns right off the rack at heavily discounted prices.

Vito said she already has more than 300 wedding gowns available, including for plus-size brides, and uses her connections across the country to acquire those sample dresses.

“Because I’ve been in the bridal industry for so many years, I made a lot of friendships in other stores across the United States,” Vito said. “I even have a store in Seattle that sends me dresses. The people that I’ve known that have stores, they are excited about my new adventure and they want to have their samples out of their stores, because that’s not what they sell. They take orders on dresses. So they’re putting them in my store to sell the samples.”

And the price, with some dresses up to 70 percent off their original price, means brides can have the benefit of a top-range dress without it breaking the wedding budget.

“The special order is nice if a bride doesn’t fit in the sample, if she’s out of proportion and it’s impossible for her to buy it straight size,” Vito said. “Then it’s important for her to order one. But it’s mostly just the cost that attracts them. A lot of people want a $3,000 dress but have $1,000, and here is the place where they can combine those two.”

In the store itself, Vito has said she tried to give it a younger feel, including in the furnishings that she brought in from her own home and other places. Say Yes For Less will also have an expanded social media and online presence, allowing for easier interaction with potential customers from across the area.

“I don’t think the brides are becoming younger. Brides are always around the same age,” Vito said. “I was just getting older, and I needed a younger approach to my business, which is why all my employees are under 30 years old. They are instructed that any time I do something old lady-ish, that they have to tell me. And they do. So I’m making sure to have a more youthful approach to the customers.”

That shift in expectations extends to how trends in bridal gowns have shifted, which goes hand-in-hand with how wedding days themselves have changed. Vito said in the past, her clients typically would get married in a house of worship and then have their reception at a country club, but that is becoming more rare.

Now, she said more and more couples prefer so-called “destination” weddings on a beach, at a vineyard, in a barn or in other locations. These new preferences have affected how dresses have evolved, Vito said.

“As they call these destination weddings — which they really aren’t any more, it’s just a typical wedding — they want a destination dress,” Vito said. “So the dresses look more appropriate for the barn wedding or for the beach wedding, for the vineyard, and they come with their destination in mind more so than wanting their shoulders covered and a long train.”

Vito said she also will offer tuxedos, as well as more colorful dresses for the mother of the bride and other special occa- sions. She said she expects to do a strong trade on those dresses early next year, given the num- ber of inaugural balls likely to be held for the new president.

There were fears at the start of this year in Alexandria about a spate of small business closings, of which Hannelore’s was one. After a domino of closures that included staples like Mancini’s, Monroe’s, Why Not? and Decorium among others for a variety of reasons, things appear brighter.

More than 35 retailers — both small businesses and national brands — are scheduled to open in the city this fall across a number of neighborhoods including Old Town, Del Ray, Carlyle and the West End.

The Alexandria Economic Development Partnership and the city’s Small Business Development Center worked to attract new retailers, and trained new and existing businesses to be able to deal with the incoming MGM casino across the Potomac River at National Harbor. In addition, the city’s adoption of small business zoning changes has enabled quicker approvals for new businesses.

“Alexandria is a world class city with a proud reputation and track record of small business starts,” said Stephanie Landrum, president and CEO of AEDP, in a statement. “Over recent years, we have broadened our focus to ensure these start-ups can also thrive in their footprint, and expand their footprints as they grow. … Small businesses shape the culture and feel of our city and we are thrilled with this recent growth of small business and entrepreneurship in Alexandria.”