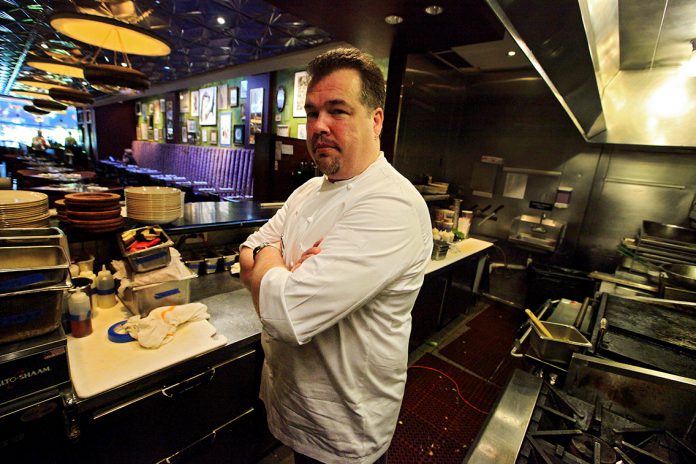 Chef Graham Duncan is back where he thrives — in the kitchen. He’s never been busier either, overseeing a staff of more than 80 and spending a day each week at a different restaurant.

“It’s not nearly as glamorous as it seems,” Duncan said. “But I’m happiest during the chaos in the kitchen, when you get that adrenaline rush and everything is flying and you have crazy orders coming in right and left. You can only do so much with these two hands, and back there it’s about being consistent and trusting your team.”

Duncan, 48, has an intense presence. He talks and moves quickly and deliberately because his time is limited. He’s the corporate executive chef for Alexandria Restaurant Partners, which this year alone opened Lena’s Wood-fired Pizza and Tap in Del Ray, Palette 22 in The Village at Shirlington, The Majestic and Vola’s Dockside Grill and Hi-Tide Lounge along the waterfront in Old Town. The group also owns Virtue Feed and Grain in Old Town and Cafe Tu Tu Tango in Orlando, Fla.

“I have chef teams in each of these restaurants, and I spend a day a week with each one of them,” he said. “I hand-pick my chef teams. I create the concepts with the operating partners, put all the food together, do all the recipe development and hire and train the chef teams and then keep everything from going off the rails.”

“There are a lot of chefs who walk in the door with their signature cuisine,” Duncan said. “I don’t do that. I like to make a restaurant into what it’s supposed to be.

“It’s not about my food and what I like, it’s about fashioning menus to fit a certain feeling. This is why I am able to create concepts that are so wildly different. You can see that if you go into all of our different restaurants.”

The Majestic reopened in May after undergoing a three-month renovation that Duncan said cost several hundred thousand dollars, of which $35,000 was devoted to the kitchen.

“The way that I approach the food is that this is a modern urban American bistro,” Duncan said. “And we’re updating the menu almost daily. Tonight we’re creating a kabocha squash ricotta gnocchi. I mean, this thing is basically the same as a traditional gnocchi but with less starch.

“It’s held together by the ricotta cheese, and the pillows of squash and cheese are light as a feather and we’ll sautee it with a little bit of local mead, some cream, fresh nutmeg, some ghost chili hot honey and toasted pecans. It’ll all come together before we open up our service tonight.”

Duncan, a Florida native, moved to Burke, Va. with his wife and two daughters in 2008 to become the executive chef for the Founding Farmers flagship location in D.C., a position he held to great acclaim until 2012.

He is a graduate of the Florida Culinary Institute and the New England Culinary Institute, and his resume also includes stints as the executive chef of the five-star City Grill in Atlanta, Ga., and sous chef of Bistro Mezzaluna in Fort Lauderdale, Fla.

He took a break from cooking from 2012 until earlier this year to raise his daughters, consult with restaurants on their concepts and teach at Stratford University in Baltimore.

“How do you really know your subject? When you know how to teach it,” Duncan said. “Learning how to teach cooking at the level of the culinary school solidified my craft within me. It made me into a better chef, because I’m able to pass on knowledge.”

“It’s true. Graham is intense,” said Dave Nicholas, APR’s partner in charge of conceptual development. “But he keeps the intensity inside and channels it very well. He’s adaptable and super approachable, always on point and gets things done in a timely manner.”

Nicholas said he and Duncan envisioned the Majestic as a comfortable supper club adorned with eclectic art.

“We’re about comfort, not pretension,” he said, noting that the group plans to perfect its group of restaurants before opening any more locations. “We are looking at a number of different projects, but nothing deliverable until the fourth quarter of 2017.”

What do these restaurants mean to Alexandria and its economic climate?

“By offering unique experiences at each site, ARP has proven itself to be an innovative restaurateur, targeting different sectors of our large tourist and resident populations — giving something for everyone,” said Joe Haggerty, president and CEO of the Alexandria Chamber of Commerce. “We look forward to continuing to work with them in 2017 and see what delicious treats are in store.”

For Duncan, the work is what he does best — creating consistently delicious and surprising food for a diverse clientele.

“This past August I will have been cooking professionally for 28 years,” he said. “I can’t imagine myself doing anything else. It’s part of who I am.”