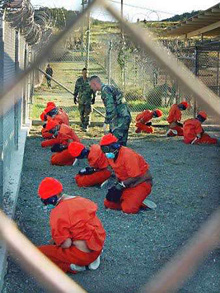 Rep. Jim Moran (D-8) of Alexandria gathered signatures from more than 140 Congressmen this week to petition the president to close the Guantanamo Bay detention facility.

In a letter sent last Friday, Moran wrote that the detainment facility has undermined Americas image as the model of justice and protector of human rights around the world and that it has become a liability in the broader global war on terror.

Moran has been a stalwart critic of the detention center. The House of Representatives recently passed Morans amendment to the Defense Authorization bill that requires the Department of Defense (DoD) to prepare a plan to transfer detainees from the facility.

Guantanamo is anathema to our values as a nation, governed by the rule of law, Moran said in a statement accompanying the letter. This letter makes clear there is strong support in the House for a new way forward on Guantanamo and our current, detrimental detainment policies.

The lawmaker also highlighted some of the centers more disturbing statistics. Just ten of the 700 detainees that have been held in the prison since its opening in 2002 have been charged with a crime. And just three detainees have been granted a hearing before a military commission in the center, while four have committed suicide.

The letter comes a week after former Secretary of State Colin Powel called for closing the prison, also stating that it is weakening the United States global standing.

The closure of the detention facilities at Guantanamo Bay would represent a positive first step toward restoring our international reputation as the leader of democracy and individual rights, Moran wrote to the president, This will allow for the implementation of fair and transparent trials to bring enemies of our country to justice.