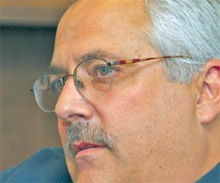 When City Manager Jim Hartman proposed a $508.9 million budget for FY 2008, meeting City Councils target of an increase of only 2.25 percent, officials knew that their work leading up to budget adoption would be difficult. Of particular concern is the cost of personnel; salaries and benefits.

The 2.25 percent growth target translated to $11.2 million. Hartmann divided that amount evenly between the city and the public school system, giving each $5.6 million above last years budget. Hartmann chose to allocate most of that money, on the city side, to capital projects, adding only .2 percent to operating costs.

Over the past two years we have conducted a number of assessments of our city infrastructure. Our priority now is to identify sufficient funding to correct deficiencies and appropriately maintain our city facilities and public spaces, said Hartmann. Deferred maintenance will only result in future generations carrying a large financial burden. While the FY 2008 CIP (Capital Improvement Projects) addresses and funds immediate needs, certain projects have been deferred to FY 2009 and FY 2010. This presents a challenge since the cost of these projects will likely exceed available funding levels. I recommend that City Council and city staff rethink our long range CIP in the fall of 2007 to address these financial issues, Hartmann told Council.

On merit
On the operating side, Hartmann recommended adding a step to the top of the salary scale to allow all eligible employees to receive at least a merit increase. He did not recommend a cost of living adjustment (COLA), which would cost $3.6 million for each one percent raise. The school boards proposed budget included a two percent COLA for employees.

Our employees continue to be our most valuable asset. We must continue to meet the competitive challenges of a very tight regional labor market, said the city manager. Other local jurisdictions, the federal government and the private sector are all competing for quality employees. We perform our valuable public services through our employees, and it is important that city pay and benefit levels remain competitive. As a result of our fiscal constraints, I am unable to recommend a cost of living adjustment for employees in the proposed budget, Hartmann said.

The cost of health benefits is a real concern nationwide, said Councilman Paul Smedberg. We want to make certain that our employees have quality healthcare options and that we are getting the maximum benefit for the dollars we spend.
Councilman Tim Lovain agreed with his colleague. Last year, the city manager made a pact with our employees for them to begin to share the cost of health insurance premiums. All new employees are now paying 10 percent of the cost and, in three years, every city employee will be paying that same 10 percent. We will honor that commitment. In three years, however, we may need to look at something else, Lovain said.

More obligations
Post employment benefits are another concern. New accounting standards now require such public entities as the city and the school system to set aside funds to pay for those financial obligations. The city must develop a plan for funding its estimated $120 million plus in long term liability for retiree health and life insurance benefits. The city began setting aside money for this purpose last year and has earmarked nearly $1 million for that same purpose this year.

We must set aside enough money each year to maintain our double triple A bond rating, Lovain said. If the bond agencies tell us we need to do more, we need to do more. For now, I think we are in good shape. The school system, however, must also develop their own plan for meeting these obligations.

All city officials would like to give employees a COLA. Declining revenues just make that very hard without raising the real estate tax rate, Smedberg said. We would certainly consider a COLA if we have additional revenue.

For the most up-to-date information, visit www.alexandriava.gov and click on budget.