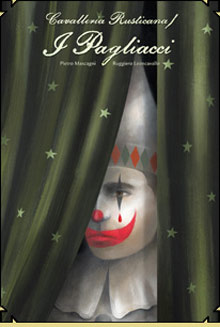 As much as we’d like to think of universally-acclaimed opera stars as floating above the clouds, ethereal, dreaming of their next aria, Cristina Nassif is driving from a weekend performance in Richmond, juggling a cell phone call from a reporter and battling Route 50 at rush hour. Her hotel room in Chantilly will have to wait.

“It’s really no big deal,” she says, good-naturedly. “The first show is not til Friday.”

With any luck, the traffic will subside by then and when the lights go up in Fairfax, opera-lovers will be treated to Nassif’s powerful and expressive voice in Leoncavallos I Pagliacci and Pietro Mascagni’s Cavalleria Rusticana, a double-bill production known as “CavPag.” The opera brings together two of the most famous one-act tragedies of Italian opera in performances at George Mason University. The show runs again on Sunday.

Nassif, 29, of Fort Washington, Md., plays the multi-layered role of Nedda, which she sings in Italian with English supertitles. Pagliacci (Clowns) is an opera in two acts written and composed by Ruggero Leoncanvallo.  It is the tragedy of a jealous husband in a commedia dell’Arte troupe, with Nassif playing a confused, cheating wife in a small town in Sicily. The opera first premiered in Milan in 1892,  but Nassif says the opera has some modern themes.

“I absolutely love this character,” Nassif says.  “I do think she has a lot of heart, but she’s strong when she’s threatened…You see frustration in her. While she feels she owes something to her husband, she ‘s so ready to get out of this life.”

The two operas take about an hour and 15 minutes apiece, with an intermission in between. “The audiences in Fairfax are really going to enjoy this,” she says.


Meteoric rise
Known for her electric stage presence,  Nassif is quickly establishing herself as one of the finest singing actresses on the American operatic stage. She lit up the Kennedy Center Opera House last May in her Washington National Opera debut, bringing her bold soprano and fiery temperament to the role of Vitellia in Mozarts La Clemenza di Tito.

She began her career as a member of Virginia Operas Spectrum Resident Artist program where she sang First Lady in Mozarts The Magic Flute and covered Marzelline in Beethovens Fidelio.  These performances will be followed by her return this May to the title role in two fully staged productions of Carmen with the Shreveport Opera, immediately followed by the West Virginia Symphony Orchestra.

The daughter of two musicians, Nassif  began her vocal training with her mother, Spanish mezzo-soprano Cristina Herrera de Nassif, and the two have shared the concert stage with her father, Thomas Nassif, an Air Force physician stationed in Spain, and also an accomplished pianist. Her family was large, with sisters and a brother, who provided support and enouragement.

“I grew up in a house filled with music,” says Nassif. “So I started thinking about this as a career when I was finishing high school. “I thought I’d  be a teacher or a pediatreician but they really encouraged me:  God gives you a gift and you should use it.”

Nassif earned a Music degree from the University of Maryland and an Artist Diploma from The Academy of Vocal Arts in Philadelphia. While there, she began working with her current teacher, Bill Schuman.

“I’ve been so fortunate to have such wonderful teachers,” she says. “As part of the Virginia Opera’s Young Artists program, this allows me to give back.”

As a spectrum resident artist, Nassif travels the state, bringing not necessarily opera but historical pieces as well to schools.  “It’s always amazing to see the response,” she says. “They come in thinking they’re going to see a bunch of old ladies with horns on their heads…They’re always surprised to see we’re not much older than they are.”

“La Traviata,” she says, basically follows the story line of the movie “Pretty Woman,” and “West Side Story” is a modern version of “Romeo and Juliet.”

“We’re not dumbing it down in any way,” she says. “It’s always a pleasant surprise to see how we can connect with young people by relating the performances to their everyday lives.”

If you’re going….
Virginia Opera-Cavalleria Rusticana/i Pagliacci will be performed this Friday, March 30 at 8 pm and Sunday, April 1 at 2 pm at the George Mason University Center for the Arts Concert Hall in Fairfax at 8 pm. Log on to www.vaopera.org for ticket information.