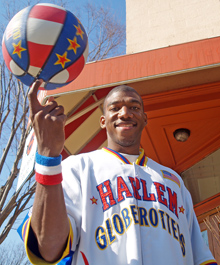 The Harlem Globetrotters may have trademarked the art of acrobatic dunks, dazzling fake-outs and stupefying aerobatics, but to hear performer Anthony Blakes tell it, the hardest part of his act is battling the butterflies.

“It’s about extreme athelticism, but you still get butterflies before every game,” said Blakes, pondering his stage fright at St. Elmo’s coffee shop in Del Ray Friday. “Sometimes,” he chuckles, “I get birds, not butterflies, in my stomach before games.”

But make no mistake about it, he’s a professional. And once the ball goes up at the Patriot Center this Saturday, Blakes says the butterflies take flight. At least, that’s what they usually do in 300 performances per year, with a grueling tour schedule which takes him to 197 cities in North America, South America, Europe and Asia. “Some of our teammates speak French, Spanish or German,” he said. “So knowing the local catchphrases comes in handy.”

The Globetrotters are celebrating their 81st consecutive season of barnstorming across the globe, traveling to 118 nations and playing before 124 million fans. This Saturday, March, 17, they bring their “Nothing Like It” World Tour to George Mason University’s Patriot Center in Fairfax for a 7:30 pm game. Tickets start at $14. “The 2007 World Tour features the team’s strongest roster in terms of athleticism, skill and personality,” said Globetrotters’ chairman Mannie Jackson. “Anthony Blakes is one of our best ambassadors.”

Blakes is a 6’2″, 185-pound tower of blue twisted steel. An extremely athletic guard and uncompromising scorer, he joined the Globetrotters during the 2003 tour of North America and now averages 15-20 dunks per game. “His incredible quickness helps him penetrate the lane and finish the play or pass to an open teammate,” Jackson marveled.

Not to mention that he can “orbit” a basketball around his head, hands-free. “We’ve got some pretty wild moves,” Blakes said. “We don’t have names for most of them.”

Blakes has also mastered what he calls the “half court granny shot,” a near-impossible move in which he hurls the ball between his legs down the court for a prize-winning swoosh. “I’m usually one for three,” he admits. “But when I make it, the crowd goes wild.”

Making the grade
There’s pressure to generate new moves, because Globetrotters have to make the 28-member roster every year. Blakes is celebrating his fifth year. “So,” he says, “there’s no chance to get complacent.”

Blakes grew up in Phoenix, AZ., where as a kid he stole his father’s hats to use as makeshift hoops around the house. “I used to get in trouble when I’d shoot a top through them,” he recalls. He won basketball scholarships to the University of Wyoming and Arizona Western Junior College, where he majored in psychology and was a leading point-scorer.

After playing a few seasons for professional leagues in Finland and Canada and for the NBA Developmental League, Blakes was recruited by the Globetrotters, playing his first game at the 22,000-seat Madison Square Garden in New York. That first game, he recalls, was “utterly terrifying.”

Now, five seasons later, Blakes’ got his groove. “No matter what’s going on in the world, people come to our games for fun, family and entertainment,” he says, “…and a sense of well-being.”


IF YOU’RE GOING
The Harlem Globetrotters play two games Saturday, March 17 against the New York Nationals at the Verizon Center in Washington at 1 pm and at the George Mason University Patriot Center in Fairfax at 7:30 pm. Tickets start at $14 and may be purchased from Ticketmaster at 703-537-SEAT or online at www.ticketmaster.com.