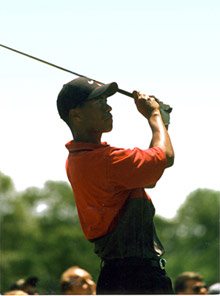 Woods donated 30,000 free tickets for the tournament to military personnel, who will be treated to special seating behind the greens and hospitality tents.

Its very important to me that this tournament honor the men and women who serve in our armed forces, Woods said. They put their lives on the line so that we are able to enjoy our freedom, and wed love for them to come out and enjoy a few days of relaxation. Our intent is to honor and really thank the people that protect us.

Woods even extended a playing date to a soldier: Sgt. Maj. Mia Kelly of the 1st Information Operations Command at Fort Belvoir. She will tee off with Tiger at 6:30 a.m. on the No. 1 hole on Congressional CCs blue course. Air Force Master Sgt. Andy Amor of Andrews Air Force Base and AT&T Chairman Randall Stephenson will complete the foursome.

I think this is one of the most exciting things ever its almost like winning the Powerball of golf, Kelly said.

The quartet will be joined on the 15th or 16th hole by former President George H.W. Bush, who will accompany them for the remainder of the round.

Sixty Soldiers from Fort Belvoir will unveil a large American flag inside the ropes on the No. 1 fairway to the tune of God Bless America. Four hundred U.S. flags also will be distributed to spectators surrounding the tee box, while an Air Force drill team performs and a Navy band plays patriotic songs.

Spc. Vicki Golding, the Army Family and Morale, Welfare and Recreation Commands 2006 Military Idol winner, will sing the national anthem at 11:26 a.m., followed by a flyover by the Armys elite Blackhawk Helicopter Wing.

At 11:38 a.m., Woods will offer a golf tip to former President Bush, who following a drum roll will launch the honorary first shot of the tournament.

Tigers doing this in honor of his father, who was a Vietnam veteran, Fort Belvoir Golf Club General Manager Peter Cizdziel said.

I think it will be beyond words, added Kelly, who was born in South Korea in 1965 and adopted in 1970. She immigrated to the United States in 1974 and attained U.S. citizenship 10 years later. She joined the U.S. Army in 1983 and has deployed five times to Panama, Afghanistan and Iraq.

Kelly, who holds a bachelors degree in criminal justice from the University of Maryland, began playing golf in 2004. She is a member of Fort Belvoir Golf Club, where she plays several times per week.

I would rather play golf than do almost anything else its an absolute passion, said Kelly, who has an 11 handicap.

Sgt. Timothy Smith, who works for the Joint Personal Property Shipping Office at Fort Belvoir, is scheduled to serve as Kellys caddie during the Pro-Am.

Complimentary tickets for active-duty military personnel to attend the second round of the AT&T National on July 6 are still available on a first-come, first-served basis at the Pentagons Ticket Office.

A limited number of tickets also are available for purchase at Fort Belvoir for $20 to attend daily play Tuesday through Friday or $25 for each of the final two rounds.

Tim Hipps is an information specialist with the US Army at Fort Belvoir.