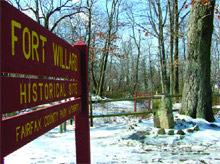 Like it or not, Fort Willard is going to be renovated.

The Fairfax County Park Authority is not saying it harshly, but there is no indication that the face lift for the tiny, sagging circular fort at the peak of Belle Haven will be held back, even by the sharpest outcries by the loudest homeowners.

At their regular meeting on Feb. 28, the Fairfax County Park Authority Board voted to approve the draft Fort Willard Historic Site Master Plan.  The master plan is substantially the same as the draft presented at the December 12 public hearing with several clarifications and adjustments that respond to the public input received.

“Consistently through this park planning process, we heard from the public about concerns related to parking and traffic in the Belle Haven subdivision, maintenance of the park amenity zone and safety issues as a result of increased park use after the fort restoration,” said Patricia S. Rosend, a Fairfac County Park Planner. “The park plan provides guidance on these issues that we believe addresses many of these concerns.”

As funding becomes available and the cultural resource studies are completed,  implementation of the park master plan will begin.  At that time, more detailed plans will be developed to partially restore the Civil War era fort and to improve the park amenity zone.

The Park Authority is working with several private sources to fund the improvements to this historic site.  No Park Authority funding sources have been identified for the site development at this time. Future funding could be provided through a park bond initiative and/or through use of other alternative funding sources such as proffers, grants and/or donations.
But if Belle Haven residents living near Fort Willard Circle are strongly against the restoration, it has not been enough to stir the hearts of their neighbors who think that as long as the county lives up to its promises they will half-heartily support it. Many neighbors felt the restoration would work as long as not too many trees would be cut down by the county, that not too many tourists would park in front of their houses and that a visit to the fort would last an average of 20 minutes.

Fort Willard never had any structures. It was made up of a couple of hills, inside of which was the magazine that held the gunpowder, and another hill protecting the men from attacks. After the Battle of Bull Run, the Union top brass realized the vulnerability of the nation’s Capital and created several other similar mini-arsenals. Fort Willard’s 20 cannons protected Alexandria and Washington, D.C. from the advances of Confederate forces.

The proposed renovation would entail cutting down trees, clearing brush, repositioning the entrance, new earthen hills, a sentry post and a new trail.

Diane Mauk can literally throw a rock from her house and have it land in Fort Willard. She is for the plan provided that “they have assured us it’s not going to be the kind of park that people will come to to have picnics and stay for long periods of time. If they (visitors) haven’t done that up to now I don’t know why they would do it in the future.” Mauk said that clearing brush and older trees is good, as is making a walkway and planting grass.

Parking concerns
Gayla Reed has lived in Belle Haven for 17 years, eight of which have been on Fort Willard Circle. “I do think a lot of it will be improvement, but I don’t want them to do too much. My only concern is coming from outside the neighborhood and people parking everywhere. I think its going to attract a lot of Civil War buffs and that means parking in front of my house. It’s just a residential neighborhood and not meant to be a tourist attraction.”

County park planner Pat Rosend said, “Yes, there is no parking for guests, but this is not the kind of park where people will hang out for hours. There’s not much here. There is no structure, only two embankments, a trail, and a couple of donated cannons. The type of visitor we would project is really someone who is interested in history and a short visit; we would expect 20 minutes and it would be a stretch to say an hour.”

Rosend said that a master plan should be completed by the end of next month and after a series of environmental and archaeological surveys, the project should be underway by next year.