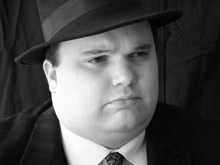 For local actor Jay Tilley, wholl be displaying his talents in the one-man show Lost Eden: The Magnificent Welles at the Lyceum Museum in Old Town starting June 28, the stage hasnt always been his true calling.  While working as a sports journalist in Arizona, the Bristol, Va. native experienced a post-graduation career crisis that would eventually define his life.

I didnt have a lot of money and was basically unhappy with what I was doing, recounts Tilley of the morally dry times he spent in the desert during the late 1990s.  Id wanna be a cop one day, a firefighter the next, and an astronomer the day after that.  Then it dawned on me that there was one profession that would allow me to be all those things, even for just a short period of time acting.

A performer since childhood, Jay accepted an invitation from his sister to move to the Northern Virginia area and within a few months landed his first gig in a production of the musical Oklahoma.  After eight years of roles spanning from light opera to contemporary drama, Tilley feels ready to now tackle his toughest part yet, that of the legendary actor / director Orson Wells.

Set in 1942, the year following release of his monumental Citizen Kane, Lost Eden explores the master thespians editorial fight over The Magnificent Ambersons with studio bosses eventually trimming Orsons 132-minute epic into an 88-minute matinee-ready product.  As Tilley points out, this was the first of many battles Welles would eventually lose in pursuit of his artistic vision.

While the younger crowd may only identify the rotund celebrity in terms of either his cartoon voice-over stints (Rikki-Tikki-Tavi, The Transformer Movie which was his final film role in 1986) or his commercial endorsement of Paul Masson champagne (we will sell no wine before its time), Jay Tilley feels many of his generation are missing out on what made Orson Welles a Hollywood maverick.

A friend of mine likes to say that Welles was [Marlon] Brando before Brando, and I agree first and foremost, he was passionate with the work. A bit arrogant, a bit genius, Orson also had a vulnerability to him, losing both parents by the age of fifteen, that I think this play does well in pointing out.  Also, as a man, Orson was intriguing at least thats what I hope audiences will see in him.  He did some very daring stuff that was turned out to be horrible in a fascinating sort of way.  Lets put it this way – Id take bad Welles over a lot of peoples best work.

As for assuming the once-in-a-lifetime part, Jay has been steadily perfecting the legends trademark baritone and mannerisms.  The performances toughest facet though has been one based on attitude.

Lets just say Im a lot more modest than Orson Welles ever was.  Even after all his failures, he had this brash swagger about him that I will never have in my own life.

This Zemfira Stage production will run June 28 July 15. Tickets are $15 for adults and $10 for students, seniors and military personnel. For reservations or more information, please contact 703-318-0619 or visit www.zemfirastage.com.