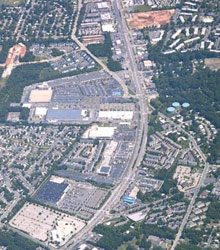 The amended plan also includes a Northern Virginia package of $400 million annually and relieves concerns that secondary roads would become a local responsibility.

If the changes are approved, they would become the most sweeping transportation funding reforms since 1986, and would provide local elected officials with a broader menu of revenue-raising options.

The move appeased many critics, including some Democratic legislators who had previously said that Kaine had not proposed enough specifics on how to fund the package. The Republican-led House and Senate will vote on Kaine’s amendments on April 4, and some Republicans expressed tentative support for the amendments Monday.

“We certainly have the right to look at it, but the general tenets, I think, are good,”  Del. M. Kirkland Cox (R-Colonial Heights), told reporters in delivering the GOP response. “The tone from the governor was very good from the beginning.”

Over the past month, Kaine has crisscrossed the state, seeking input on how to tweak the proposal into a “workable” package.

Despite guarded optimism about a decent bill emerging after the special General Assembly session, some Fairfax officials warned that it was still a “sad day” that enough was not done to raise revenue at the state level.

House Speaker William J. Howell (R-Stafford) and others said there is general agreement on many issues, such as raising abuser, titling and license fees, and the like.

“We’re very much in agreement of what needs to be done,” said the House’s new minority leader, Del. Ward Armstrong (D-Martinsville).

Kaine’s proposed statewide funding of transportation projects amounts to more than $375 million annually, plus directing two-thirds of each year’s spending surplus to transportation when the state sees a budget surplus. This could add about $86 million during high-surplus years.

He said the spending would be supported by the dedication of one-third of insurance premiums to existing and new debt payments, which also frees up construction funding.

The plan also earmarks about $65 million annually from the tax paid to record real estate deeds and wills, dedicating two-thirds of it to highway projects.

Kaine’s plan would also increase the percentage of bonds going to transit capital from 16 to 20 percent.

Despite some officials’ concerns that Fairfax might not have the last word on local taxes enacted on its citizens, board chairman Gerry Connolly (D) pointed out that without Fairfax present, the NVTA board would not even possess a quorum, let alone a majority of votes to impose taxes.

Fairfax, which represents a majority of the regional population, could torpedo efforts if it decided not to “play,” or enact the regional taxes.

Roads devolution, the county’s main concern with the bill, was removed from the bill altogether.