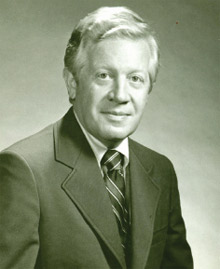 Last week, former Alexandria Mayor Frank E. Mann died, but his legacy lives on in the city he loved.

Frank Mann spent several years guiding our great city at a time of many changes in American society and in Alexandria, said Mayor William D. Euille. We thank him for his leadership and dedication to Alexandria and extend our deepest condolences to his family.

Mann oversaw many changes in Alexandria. He was outspoken and often controversial. Vola Lawson was the citys director of housing during his last term as mayor.

Perhaps his most important contribution was his unfailing support for the revitalization of Old Town and the Gadsbys Urban Renewal Project, Lawson said.
This project and the Mud Town project that led to the building of T. C. Williams High School and other changes in that area brought Mann into conflict with leaders in Alexandrias emerging African-American community. Melvin Miller was one of the leaders of that community and ran for mayor against Mann in 1976.

The 1960s were a time of great change in Alexandria and we let Frank know how we felt about the urban renewal projects and about many desegregation issues, Miller said. The first time I met him was in 1961 when he waged his write-in campaign for mayor and won.

Two years later, the two met again in a courtroom. Miller represented a group of African-Americans who staged a sit-in at a King Street restaurant. The lunch counters had been integrated but it took two years more to integrate the restaurants, Miller said. We were in court, defending the protesters and Frank walked in. The judge asked the bailiff to get him a chair and put it at the table with the attorneys. Ive never forgotten that.

There were other changes in Alexandria during Manns time as mayor having nothing to do with integration. As he entered office, the Woodrow Wilson Bridge opened, connecting Virginia and Maryland. In 1961, the city purchased Fort Ward Park and restored it as a Civil War centennial project; in 1962, Mann created the Department of Planning and Zoning; in 1964, Alexandria was named an All-American City; in 1966, Alexandrias Old and Historic District was placed on the National Register of Historic Places; and, in the 1970s, negotiations to bring Metro to Alexandria began.

Decorated serviceman
Mann was born in Atlanta, Ga., on May 1, 1920. After graduation from George Washington University in 1941, he joined the U.S. Navy and received the Bronze Star for his service in the Pacific theater during World War II. After the war, he settled in Alexandria and was a fixture in local politics for the next three decades. He was a member of the Alexandria City Council from 1952 to 1958; served as mayor from 1961 to 1967 and 1976 to 1979; and represented Alexandria as a member of the Virginia House of Delegates from 1970 to 1975.

He devoted his heart and soul to Alexandria, said Virginia Congressman Jim Moran, (D-8). You could always find Frank out in the community with his constituents. Even after leaving office, he was integrally involved in the important issues affecting the direction of the city.

Man of many talents
In addition to his involvement in politics, Mann was active in many civic organizations. He was a charter member and president of the Alexandria Optimists; president and chorus director of the Alexandria Harmonizers and chairman of the Board for the Alexandria Boys Club. His family owned and operated the Mann Potato Chip Company where he served as president. He was also president of the Potato Chip Institutes, International; was vice president of Sunshine Biscuits and Kidstuff, Inc.; was chairman of the Board for the American Logistics Association and a Board member for First Commonwealth Savings and Loan and PepCom Industries.

Frank was one of those old-style politicians who believed in my way or the highway but he was willing to compromise when that outcome became inevitable, Miller said. The thing I respected most about Frank was that you always knew where he stood whether you liked it or not.

A memorial service was held on May 2 at Christ Church in Old Town. Frank Mann was 86 years old.