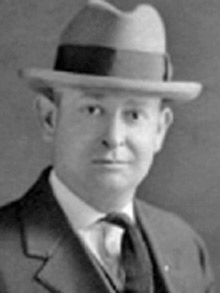 National Police Week is May 13-18, and while most of the local focus this year will be on the two Fairfax County officers who lost their lives last May in a shooting at the Sully District Station, Alexandria has added two names of fallen officers to the National Law Enforcement Officers Memorial as well. Watchman Gerrard Arnold died in the line of duty in 1827 and Detective William McIntyre was killed in 1935.

These two officers were unknown to the Alexandria Police Department until last year. I learned about Detective McIntyre when I was doing research on the book about the Department that was published last fall, The Alexandria Police Department, and found information about Detective McIntyre, said Amy Bertsch, former Public Information Officer for the Department. I learned about Watchman Arnold when I saw a reference to his murder in an 1891 newspaper article. Chief Baker submitted the paperwork and they are both now remembered on the National Law Enforcement Officers Memorial.

Husband kills officer
Watchman Arnold was trying to make an arrest at a home on the Alexandria waterfront. As he approached the home, he ran into a woman who was attempting to enter the same residence. He pushed her aside so that he could enter and apprehend the suspect. The woman was offended by Arnolds behavior and told her husband. Several days later, on Aug. 30, 1827, the womans husband was drunk and attacked Watchman Arnold at an Alexandria business. Arnold died of his injuries on Sept. 9. He had served with the Alexandria Police Department for 12 years. His murderer was convicted of manslaughter in November, 1827. While his sentence is unknown, he was fined $300.

Shot over coal
Detective William McIntyre worked for the Southern Railroad Police Department. He was shot and killed on Feb. 20, 1935, while trying to arrest a man stealing coal from a train near the intersection of Duke and Henry streets. McIntyres murderer fled to New York where he was finally arrested in 1941. He was returned to Alexandria, convicted of murder and was sentenced to life in prison.
It is never too late to honor those law enforcement officers who have given their lives protecting others, said Alexandria Police Chief David Baker.

Alexandria police will lay a wreath at the citys law enforcement memorial on Monday, May 14, at 11 a.m. and will hold a memorial service at The Baptist Temple on Commonwealth Ave., at 10 a.m. on Thursday, May 17.