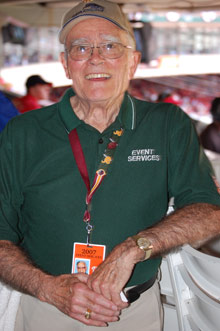 Baseball is like church, the great catcher Wes Westrum once said: “Many attend, but few understand.”

Like hitting the ball out of the park, there was a certain truth to the words of the late New York Giants grand slammer as I left work far too early Monday with my four-year-old in tow, to make the pilgrimage down to RFK Stadium for the Nationals Opening Day.

True, my little slugger had no idea the cosmic significance baseball plays in our national psyche, nor does he yet understand how the game is played, or what an RBI is. Nor does he realize how hard local heavies worked to bring the Great Game back to our nation’s capital.

All he knew was that it was time with daddy. And baseball.

As he kicked his little feet from his booster seat, sporting a 4T-sized Nationals jersey and juggling the styrofoam baseball he’d picked up the day before at bank opening, the anticipation was overwhelming.

“Baseball!” “Baseball!” came his primal plea from the back seat, calling for the stress relief that only this game seems to provide.

It was the first game of ostensibly the last season at RFK, and the first time I’d been to an opening-day game at RFK since 1971, when my own father plopped me into the back seat of his ’67 Chrysler convertible and transported me to seats above the dugout at RFK.

Can’t recall much of the day, other than I got a birds-eye view of Frank Howard slugging the ball into Anacostia, and threw up on the way home from a massive over-indulgence of Ball Park franks.
Hot dogs, usually a baseball fan’s best friend, turned the tables that day.

Remember the old saw about the Senators? “First in war, first in peace, and last in the American League.”

I didn’t care. At age six, I was already a hard-core, seasoned baseball fan, wearing my red-and-white team jersey out to the ball park. Frank Howard was in the outfield and Casey Cox was pitching.

Fast forward 35 years, to Monday. The Nation’s at war in Iraq, Paris Hilton may be going to the slammer for driving on a suspended license, and the Nationals turned in their first loss against the Florida Marlins, 9-2.

In their first two seasons, the Nationals were, without a doubt, one of baseball’s worst offensive teams: nearly last in batting average, runs, hits, RBI, total bases, home runs and slugging percentages.

But my kid would have none of it. It’s a crisp, cloudless spring day, the popcorn, franks and kiddie juice boxes are flowing, and we’re sitting above the dugout, a stone’s throw away from where I sat next to my dad in 1971. He giggled at the sight of a foam-headed Teddy Roosevelt zip-lining across the field, and oogled and aahed at the day fireworks and the giant American flag being draped across the backfield.

When it was over Monday, the players gathered around the home dugout along the third base line, to greet a few of the fans who remember the final days of ’71. Back then, the national pre-occupations were Vietnam, Richard Nixon and the Gold Standard, and, of course, the Indo-Pakistan war.

Wars come and go. Presidents resign, get impeached, or get defeated.

But baseball in Washington — which stood still for 36 long and agonizing years — is back, in its timeless, soothing and mind-clearing way.

My son could not have been happier.