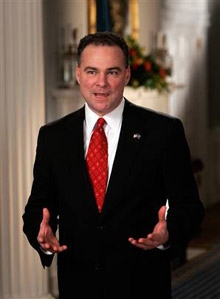 Gov. Tim Kaine told a gathering of business leaders Monday that Virginia has been named the nation’s most business-friendly state in an annual independent study which measures the nation’s top 10 pro-business states.

Speaking to an annual gathering of economic development practicioners at a Crystal City hotel, Kaine said the designation “validates the results of our hard work to create a business-environment.

Last August, Virginia also placed first among the 50 states in a ranking of the Best States for Business by Forbes.com, which considered a series of objective measurements, including business costs, tax burden, regulatory climate, quality of the workforce, and recent economic growth.

In Virginia, we work to support our existing businesses while also working creatively to recruit new investment and jobs,” Kaine told the gathering of 300 members of the Washington-based International Economic Development Council.

Kaine said the state’s incentives are rational and performance-based, and emphasize a diverse workforce, high-ranking educational resources, and Virginias low-tax business climate as it compete for new jobs and investment.

Since becoming governor last year, Kaine said he’s worked hard to retain most of the business-friendly tax and educational policies of his predecessor, Gov. Mark Warner of Old Town, keeping the budget balanced and launching a series of statewide town halls to address the state’s pressing needs on transportation. In his first year in office, he cited as accomplishments the elimination of the estate tax, the creating of Virginia’s first  tax holiday and increased abilities for taxpayers to participate in local decisions about property tax rates. “I’m pleased these initiatives have helped keep our pro-business rankings top-notch,” he said.

The study evaluated states based on such factors as taxes, human resources, labor climate, energy costs, infrastructure spending, workers compensation legislation and jobs lost or gained. The evaluation also considered 14 state government-controlled factors based on incentive programs and state economic development departments. Virginia also held the top spot in the Pollina study in 2003, and ranked second in 2004, 2005, and 2006.

Virginia has benefited from increased government spending on defense and is pressing to stay aggressive in other industries in order to maintain a diversified economy, said Dr. Ronald Pollina, the president of the corporate real estate firm which bears his name. Virginias business-friendly tax environment, location, market access, education and infrastructure are especially enhanced by one of the strongest and most professional state economic development agencies in the nation.”

Pollina said Virginians should be “very proud” of the effort made by Kaine and state legislators to foster quality job opportunities for them. “Virginia is clearly a winner, he said.