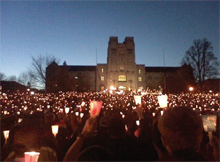 House Democratic Leader Ward Armstrong and House Democratic Caucus Chairman Brian Moran of Alexandria both condemned the shooting on the campus of Virginia Tech this week. Their sentiments echoed thousands of others as they came to grips with the massacre on campus that left 32 dead and many others seriously wounded.

The senseless nature and magnitude of this violent act is incomprehensible. The prayers of all our caucus members are with the families and friends of these victims, and members of the Virginia Tech community, the two leaders said jointly.

While no Alexandria student was killed or wounded in this weeks tragedy, there were many anxious moments as parents and friends waited for word from those who were there.

Ashlie Dawkins, T.C. Williams class of 2004, woke up early on Monday morning because she had an appointment with the dentist. When she got home to her apartment just off campus at around 9:30 a.m., she had an e-mail from the university.

It just said that there had been a shooting, she said. It didnt say that classes were cancelled or anything.

Dawkins called her mother in Alexandria to tell her about the shooting and to let her know that she was safe. Then I went to bed and decided to skip my 10 a.m. class, Dawkins said.

By the time she woke up at noon, things had changed significantly. There were messages on my cell phone and on my computer from people I hadnt talked to in years and from my friends. I turned on the news and thats how I knew what was really going on, she said.

Melinda Lynam waited all day Monday for word of her nephew, Colin Goddard, a Tech student. She finally learned that he was the last person that the gunman shot. Colin was shot three times but is going to be alright, Lynam wrote in an e-mail to friends.

On the spot
Alexandria Sheriff Dana Lawhorne was taking his daughter, Megan, back to Tech on Monday morning. My wife tried to reach me but cell service on I-81 is sketchy, Lawhorne said. My daughter, Chris, finally reached me when we were about 20 minutes from campus and we turned to a local radio station to get the news.

By the time Lawhorne got to Blacksburg, the campus was closed. He took Megan to the apartment of a friend from T.C. where they watched the news the rest of the day.

It was surreal, Lawhorne said. The kids spent most of the day on their computers making sure that their friends were alright. Being in law enforcement most of my life, it was hard to watch things unfold and not be able to do anything to help. I just kept thinking about the parents who didnt know what was happening to their kids. We send our kids to college and just dont think that anything like this can happen. It was horrible.

Lawhorne stayed in Blacksburg through the day on Monday and into Tuesday. The kids wanted to attend the convocation and, by Tuesday morning, a student vigil was planned for Tuesday night, he said.

Vigil candles donated
One of the students responsible for planning that vigil was Ryan Gleeson, a Tech sophomore who graduated from Bishop Ireton High School. His sister, Kellie, is a senior at Tech. Both are involved in student government: Ryan is the vice president and Kellie is the outgoing secretary/treasurer. Their father is Tim Gleeson, Chief Deputy Sheriff in Alexandria.

We knew that the kids were alright shortly after we heard about the shooting, Gleeson said. On Monday night, Ryan called me and told me that they wanted to have a vigil but didnt have any candles and asked if we could help.

Pam Gleeson, Tims wife, got on the phone and called Catholic churches in the area while Gleeson went to Costco to purchase candles. He found Dixie cups that could be used as holders but no candles. By the time he got home, his wife had arranged for donations of 2,000 candles. That just left 8,000 to buy.

I found the perfect thing at the Dollar Store, Gleeson said.

At 11 a.m. on Tuesday, they packed a Suburban with 9,000 candles and 10,000 Dixie Cups and headed for Blacksburg. It was amazing, Gleeson said. By the time we got there, candles had arrived from everywhere. The vigil itself was incredible to see.

Dawkins was one of those kids heading home. Most of us came home for the rest of the week just to get away from the constant reminder and the media, she said. But most of us will certainly go back. I love my school and plan to graduate there.