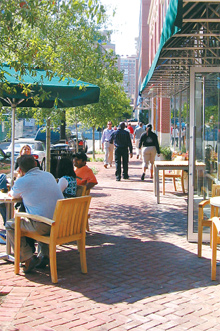 Patent and Trademark employee Colleen Rogers is happy to finally have a refuge outside her office where she can take a break from the office and sip her passion tea lemonade without getting in her car. As more businesses and residential buildings open in the Carlyle/Eisenhower East area off Duke Street, the economic engine of the blossoming region is beginning to take shape.

The Starbucks that Rogers frequents is among several cafes, restaurants and businesses located in Carlyle catering to the many government and law offices that have sprouted in the new buildings. There is also a Robeks Smoothie, Jerrys Subs, HSBC Bank and Carlyle Club Restaurant fueling the economic vitality of the region. A Learning Tree International office recently had a grand opening as well. The plan has another 16 businesses opening in the remainder of 2007 and the first half of 2008.

It is planned to be a true mixed-use community, said Stephanie Landrum, the senior vice president at the Alexandria Economic Development Partnership, Inc. There is more office space for more companies to come in, creating more jobs. Theres hardly any vacancies, Landrum added.

The location is popular to associations, technology companies, law firms and government contractors because of the proximity to the PTO, the King Street and Eisenhower Metros, and residential potential in Alexandria. Its been a very, very popular office space, Landrum said.

LCOR, an urban development company that specializes in office and residential projects, has just broken ground on their last two buildings in the Carlyle area, expected to be completed in 2009.

Vibrant anchor
Over the summer, the Alexandria Chamber of Commerce was invited to a business networking event at the Post Carlyle apartments, which opened last spring. Post Carlyle is a member of the chamber, which is a first for this section of town. In the future, the chamber may be approaching others to join. Its so vibrant, a key anchor on that end of Eisenhower, said chamber president Christine Michaels.

City council recently discussed the Carlyle area at a work session on Oct. 2. Areas they addressed included retail addition, development on a section bordering the Eisenhower Avenue circle, and the Alexandria Sanitation Authoritys request to amend the Eisenhower East Small Area Plan to add a waste treatment facility as a future land use.

New project begins
Developers are breaking ground on the 1701 Duke Street project across from the Carlyle area that will bring more economic vitality to that area as well. This building, which is going in on Edmunson Plaza, behind a historic building known as Bruins Slave Jail, will be a glass and brick structure consisting of 115,000 square feet of office space, over 15,400 square feet of ground-level retail and restaurant space, with room for outdoor patio space as well. It is expected to be completed in 2009.

Retail and Restaurants in Carlyle