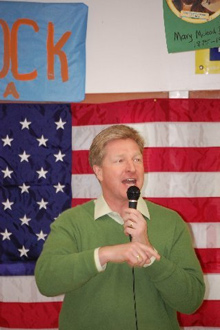 Del. Brian J. Moran (D-46) will be traveling in India over the next week, the highest-ranking elected official in a delegation of 100 Virginia business and government leaders headed to the Asian sub-continent for a trade mission.

Moran, who’s running for Governor in 2008, becomes the first Virginia legislator to ever attend a gubernatorial trade mission, and his participation in the delegation is entirely funded by private support.   Brian has a keen interest in Virginias Indian community and in our ability to compete in the new economy, said Sanjay Puri, President of the US-India Business Alliance. “Having a legislative leader with a vision of Virginias future to help shape our global strategy is invaluable.

The mission will be led by Secretary of Commerce and Trade Patrick O. Gottschalk and Secretary of Technology Aneesh P. Chopra. Events and meetings are scheduled in New Delhi, Chennai and Mumbai, India.

Gov. Tim Kaine (D) has decided to remain in Richmond to coordinate the states response to this weeks tragedy at Virginia Tech. “As we begin the healing process, I feel that my place is here with the citizens of our Commonwealth, and I deeply regret that I am unable to travel,” Kaine said.

Monday’s deaths at Virginia Tech included a student and a professor with direct family ties to India, and a portion of the trip included discussions about a Tech program in India.  Kaine acknowledged the outpourings of support from all over the world, including India.

Moran said the trip will give him a first-hand chance to learn more about the global economy and to help recruit new investment to Virginias economy. He is the only state delegate traveling with the delegation. This is a tremendous opportunity for us to ensure we remain competitive in the 21st century global economy, he said. The trip will also serve as a reminder that we can not rest on our laurels as we must be ready for the global competition that our workforce now confronts.

India is the worlds tenth largest economy and the worlds largest democracy with more than one billion people. Virginias exports to India were valued at $80 million in 2005 and, as of September 2006, Indian companies have invested $49 million in Virginia. The trip includes visits to New Delhi, Chennai, and Mumbai. There are a series of meetings with business leaders and high level members of the Indian Government. The delegation also plans to visit the Indian Institute of Technology in Delhi and the TATA Institute of Fundamental Research in Mumbai.