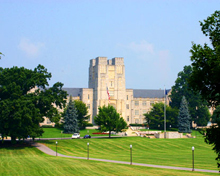 The gunman who opened fire in a dorm and classroom at the Virginia Tech campus has been identified as Cho Seung-Hui of Centreville.  Cho, 23, a South Korean native, was enrolled as an undergraduate student in his senior year as an English major at Virginia Tech. Cho was in the United States as a resident alien, according to news reports.

Cho’s shooting rampage in Blackburg, VA. was the deadliest in U.S. history, killing at least 32 people and then killing himself.  At least 15 people were injured, some seriously, police said.

A convocation Tuesday in the school’s basketball arena was held as “a public event for the university community to come together to begin dealing with the tragedy.”  Gov. Tim Kaine and President Bush attended the service.

“Our nation is shocked and saddened by the news of the shootings at Virginia Tech,” President Bush said Monday in a briefing at The White House. ” Laura and I and many across our nation are praying for the victims and their families and all the members of the university community who have been devastated by this terrible tragedy.”

On Monday, Gov. Kaine and his wife were returning to Richmond after cutting short a trade mission trip to Asia.   It is difficult to comprehend senseless violence on this scale,” Kaine said in a statement from Tokyo.   I urge Virginians to keep these victims and their families in their thoughts and prayers.

Before returning to the U.S., Kaine declared a state of emergency for Virginia, directing state agencies to take all necessary actions to aid in the response and recovery following the shootings at Virginia Tech.

A declaration of emergency allows the Governor to immediately deploy state personnel, equipment, and other resources, and to coordinate state and local response in the immediate aftermath of a tragedy.

State agencies, including State Police and the Virginia Departments of Health and Emergency Management, are doing everything possible to be of assistance to those who were injured, and those who have lost loved ones in this tragedy, Kaine said.

The Virginia State Police are on the scene in Blacksburg investigating the shootings in cooperation with local law enforcement,  and the Department of Health has sent the Chief Medical Examiner and additional personnel to the area to assist with fatalities.

The Virginia Department of Emergency Management has sent staff to the scene to advise and assist local emergency managers and first responders and the Virginia Emergency Operations Center is coordinating state level assistance. In addition, the state will help coordinate crisis counseling assistance for those in need.

Separately,  Kaine has ordered the lowering of the Virginia state flag in honor of those who were killed or injured in Mondays shootings.

The shooting started at about 7:15 a.m. on the fourth floor of West Ambler Johnston, a high-rise coed dormitory where two people died.  Police were still investigating the homocides when a gunman with two handguns and multiple clips of ammunition stormed Norris Hall, a classroom building about a half-mile away and on the other side of the 2,600-acre campus.

When police arrived, they found some of the doors at Norris Hall chained from the inside,  reportedly by the shooter.  The second attack left 30 dead before the gunman took his own life, police said.  Students were seen jumping from windows, while faculty members and other students carried off the wounded without waiting for ambulances.

SWAT team members with helmets, flak jackets and assault rifles were seen all over the campus, with some helping to rescue students and faculty members who were padlocked inside the school building.

Virginia Tech President Charles Steger said the school was “shocked and horrified,” by the shootings. Stenger was faced with tough questions from the university community as to whether it did enough to warn students about the first shootings.

Until Monday’s bloodbath in Blacksburg,  the deadliest shooting in modern U.S. history occurred in Killeen, Texas in 1991, when George Hennard ran his pickup truck into a Luby’s Cafeteria and shot 23 people to death, then took his own life.  On April 20, 1999,   almost eight years to the day after the Columbine High massacre near Littleton, Colo., two teenagers killed 12 of their fellow students and a teacher before killing themselves.

Located in southwest Virginia, about 160 miles west of Richmond,  Virginia Tech was founded in 1872 and has  more than 25,000 full-time students enrolled. It is the state’s largest school, by full-time student population. It is  known for its top-flight engineering school and its commanding football team, the Hokies.

Elected officials were responding with shock and grief to the shootings.

I am sickened by the unspeakable tragedy that befell Virginia Tech,” said Rep. Jim Moran (D-8), in offering his condolences. This is a dark day for the Commonwealth and our nation.”

Sen. Jim Webb (D-VA.) said he was “truly saddened” to hear of the shootings. “My heart goes out to the parents and families of the victims of this senseless act,” he said. “My office has been in communication with the Governors office and officials at Virginia Tech to offer any assistance.

Del. Brian Moran (D-Alexandria), who was preparing to leave for Blacksburg to provide comfort to families, said, “The senseless nature and magnitude of this violent act is incomprehensible. The prayers of all our caucus members are with the families and friends of these victims, and members of the Virginia Tech community.”

In Blacksburg, the mood was somber Tuesday, with all classes cancelled. Parents flooded into the town to ascertain information about their children, with many gathering at the Inn at Virginia Tech.

Emergency officials have established a toll-free information line for parents and family: 1-800-533-1144. Anyone with information about Monday’s incidents are being encouraged to go to the Blacksburg Police Department to make a statement, or call 540-231-6411. Counseling assistance was made available to students and faculty.