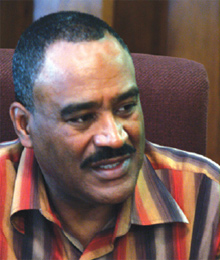 After 10 years at the helm, William Dearman has resigned as executive director of the Alexandria Redevelopment and housing Authority.

Dearman told his board in a closed session on Monday night that, This is something I have been considering seriously for some time and, in light of the recent decision on our tax credit application, I thought it was appropriate for me to leave now so that the board will have time to select someone who can be here through the entire project.

Dearman added, Now that we arent going to get the tax credits to help pay for the redevelopment of Glebe Park, that project will probably not move forward for another year. That means about seven years before James Bland is finished. I am 63 years old now and would be 70 when the project is complete. My wife and I are building a home in Atlanta to be near our daughter and grandson and the timing seems right for me and for the Authority.

When Dearman came to the housing authority, the agency had been through five executive directors in five years. Not only had there been a number of directors, there had also been a number of bad decisions including the purchase of Glebe Park, said ARHA Board Chairman A. Melvin Miller. Bill has seen us through a very difficult 10 years and has accomplished a great many things. I am sorry that he is leaving but I am not surprised.

During his 10 years, Bill Dearman has brought dignity and respectability back to ARHA in a time of dwindling federal funds for public housing. I wish him luck as he embarks on this new part of his life, said Mayor William Euille.

Challenges
The Virginia Housing Development Authoritys decision not to grant tax credits to ARHA for Glebe Park has thrown that project into a state of uncertainty. We really cant move forward until we know exactly what the city is willing to do, Miller said. I do not believe that an appeal of VHDAs decision would be successful because of the lack of a strong commitment to the project on the citys part.

That challenge, along with a number of other financial difficulties, means tough times ahead for ARHA. It is going to be hard to find someone to replace Bill who has the qualifications to see us into the future, Miller said.

While Dearmans tenure has not been without controversy, he has seen the Authority through the successful redevelopment of Chatham Square and has brought more professionalism to the ARHA staff. I am grateful to all of those who have helped me during my time here, Dearman said. When I came, things were in turmoil. I reached out to Mr. Miller and Mr. Ring and they have both been invaluable.

Miller has appointed a committee to make recommendations on an interim director and to develop process for hiring a permanent replacement for Dearman. Dearmans last day will be May 20.