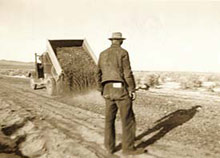 The General Assembly may have voted $6 billion over 10 years in new taxes and bond money for road building and other transit projects in Northern Virginia, but the regional roads chief says the street pavers and bulldozers may not be rolling until late summer, or later.I havent gotten any green light yet, said Dennis Morrison, the district administrator for the Northern Virginia Department of Transportation. Nothing can get started until we revive our 6-year plan.

If all new taxes are implemented in all nine local jurisdictions, the Northern Virginia Transportation Authority (NVTA) estimates that the package will generate an average $600 million per year over 10 years in new transportation funding.

I call this the cicada cycle, said Fairfax County Board Chairman Gerald Connolly, and an NVTA member. Every 17 to 21 years the State Legislature gets serious about funding transportation projects in Northern Virginia.

In its TransAction 2030 plan released last year, the group recommends $27.3 billion in system expansion and $19.3 billion in operational and preservation funds for Northern Virginia roads and transit systems over the next 23 years to keep up with population estimates and commuter needs, or $46.6 billion total. The new package could provide about half that targeted funding, if projects are green-lighted by the Commonwealth Transportation Board.

Every six years the board sets the agenda for highway and pedestrian construction improvement plans under the so-called six year plan. VDOT has set public hearing dates for nine transportation districts statewide in May and early June.

Priorities
While the NVTA has made its own list of priorities, VDOT says it needs to hold its own public hearings before all recommendations are sent to Richmond for prioritization by the board in July. The board will be acting on the recommendations of the NVTA and the public at large on how to prioritize the new transportation projects, Morrison said.

Seven new taxes
The local governments, represented by NVTA members, have been given the authority by the State Assembly to implement seven new taxes, which include a 40 cent grantors tax, 2 percent tax on vehicle rentals, 2 percent transient occupancy tax, $10 increase in safety inspection fees, 1 percent on initial vehicle registration fees, 5 percent sales tax on auto repairs, and a regional registration fee of $10.

The NVTA has also been given the authority to impose two additional taxes, as well as establish impact fees. These include increasing the commercial real estate tax, up to 25 cents per $100 valuation, a local registration fee of $10, and a commercial residential impact fee. At its monthly meeting last week in Falls Church, NVTA members voted for the taxes approved by the legislature, so that they may be voted upon and implemented by local jurisdictions represented by their members.

Alexandrias share
A second pot of annual roads money allocated from the gasoline tax and the federal government stands to create an additional $387 million for road improvements in 2007, with an increase of $22 million projected for 2008, Morrison said. Any new taxes or revenues are likely to change those numbers, according to Morrison.

Of the total amount of new funding, 40 percent would be returned directly to the jurisdiction in which it is raised, except for Alexandria, Arlington and Falls Church, where 50 percent of these funds would be used for secondary and urban road construction.

The ongoing piece of the statewide portion of House Bill 3202 will provide Northern Virginia roughly $100 million per year, said Tom Biesiadny, chair of the NVTAs interim technical committee. The statewide bond package could provide an additional $80 million per year for approximately 10 years.