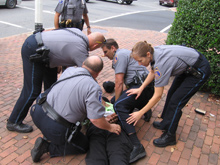 The corner of Duke and South Washington streets was a flurry of action Thursday, Oct. 4, as police responded to a call and met some resistance from a suspect who was listed as a police issue on the bank’s computer.

When the suspect was confronted around 11:30 a.m., he resisted and a fight ensued. Several officers wrestled him to the ground, put handcuffs on and waited for back up. A motorcycle police officer was joined by one cruiser initially and others in support including one SWAT officer and a K-9 unit.

“He had a knife; I just saw him throw it on the ground,” said one officer during the melee.

“You just created a bunch or more charges,” another officer told the suspect.

Officer S. Soriano, who responded as back up, asked the suspect “do you have warrants on you,” and the suspect shook his head positively.

Officer Bridgeman rolled up his pants, revealing a scraped knee he sustained in the scuffle. Officer Elkins had minor injuries, too. “I got a hell of a welt building up on my right eye,” Elkins said.

The officers and suspect went to Inova Alexandria hospital to be treated for minor injuries. The bank manager would not comment on the case but Alexandria police spokesperson said it was a “bad check-forgery case.”