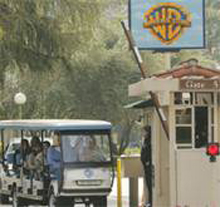 It’s not every day that you get to hang out on the set of “Ocean’s 13” with Brad Pitt, a movie to be released this week. Or, sit on the overstuffed couch inside “Central Perks,” Jennifer Aniston’s coffee joint which made “Friends” the biggest hit on television in history.

Sure, my former neighbor Billy Bush, the host of “Access Hollywood” and formerly a resident of Alexandria, gets that privilege every “working” day of the week.

So when Warner Bros. asked me to be their guest on a VIP Tour of their famed lot in Burbank recently, I lunged at the opportunity, grabbing the cheapest airfare to the West Coast my community journalist’s salary could afford.

Coasting down the 405 towards Burbank, picking up Hollywood Way and past security at Warner Brothers Gate 4 lies the largest sound lot in the world, a 100-acre jumble of hangar-size buildings, catering trucks and man-made lagoons. This is the dream factory where most of the heart-stopping flicks of my childhood were filmed — Casablanca, Mad Max, the Lethal Weapon series, Risky Business and Batman — so entering the gates felt like re-connecting with some lost memories.

“This is not an amusement park, this is a live working sound stage with real working actors and major stars,” said our tour guide, Brian Grisham, as he whisked myself and eight other tourists through a back-lot in a golf cart.

But if Grisham’s last name did not reinforce the point of celebrity (John Grisham — uncle), the sight of one of the stars of “The O.C.,” Mischa Barton, drove past us in a Jeep Wrangler and waved. As we drove past a helipad and a massive Vegas-like casino being constructed for “Ocean’s 13,” Grisham recounted in the jaded way only a Hollywood tour guide could, “That’s nothing…Recently, Brad Pitt came out of his trailer, gave us all the rabbit ears, then walked over to find out where everyone was from. I thought some of the women were going into cardiac arrest.”

As star sightings go, Mischa Barton was A-okay for me.

To cool down, Brian whisked us into the woods to peak at an ivy-crusted, water-depleted lagoon. Nothing special, eh?  “Close your eyes,” Grisham said. “Imagine the magic made here…Goldie Hawn at boot camp in Private Benjamin, pre-historic dinosaurs sipping from it in Juraissic Park, David Caruso investigating a lakeside murder in CSI Miami.”

This is where that T-Rex swallowed an attorney (purportedly Steven Spielberg’s). Some pool.

Within a block, we’d left the jungle and were strolling down a 19th century New England town, which today was doubling as production offices for CBS TV’s  “Cold Case.” However, years ago it was a town in the Wild West, the set of Mel Brooks’ “Blazing Saddles.”

Before that, it was a sleepy Southern town where Boss Hogg of “The Dukes of Hazard” lived. As a photo op, our tour guide simulated a scene by allowing a ’68 Dodge Charger, “The General Lee,”  fly over us like “ET,” about the only movie not filmed here. The real car, we’re told, sits in a makeshift museum in Amissville, Va., on the farm of former Rep. Ben Jones, who played “Cooter,” and now lives in Rappahannock County.

Uh. Oh. Hot lot coming up; Brad Pitt may be near. “Lock up your cameras!” Grisham barks, carefully locking them up in a compartment of his golf cart for good measure. You just never know when a tourist may decide to shop his celebrity-sighting to The National Enquirer.

But the lot is hardly about that. In fact, the Warner Bros. Studios experience is more about the technical ways in which movies are made; the electricians, the painters, the furniture design guys and carpenters swarming about. Lots and lots of carpenters, and sawdust, sawdust everywhere which gets mysteriously sucked into the floors by underground vacuums. There’s a sign department, a plumbing department, a miniatures department and nine floors of props, including paintings, lamps and chairs from every period. There’s Brad Pitt’s helmet from “Troy” sitting up on the shelf, and the tiny oil derrick which once sat on JR’s desk from Dallas, collecting dust in the corner. “If you can’t buy, we’ll make it here,” Grisham said. “We’ve got the largest collection of medieval thrones in the world here.”

Of course, the building is earthquake-proof.

Tucked into the corner of the furniture design center is perhaps the greatest gem of all, the tiny set where ten seasons of “Friends” were filmed, earning NBC over $1 billion and making titanic stars of Mathew Perry, Jennifer Aniston, Courtney Cox, Lisa Kudrow and Matt LeBlanc and David Schwimmer. Soon, the set will be disassembled and shipped to the Smithsonian in DC as part of a permanent exhibit.

We visited four soundstages on this day, including the live sets of “ER,” The “George Lopez Show,” the “OC,” and “Ocean’s 13,” as well as the Warner Bros. Museum, where we met 76-year-old Eddie Bockser, the museum’s docent, who began work as a studio accountant on the lot back in 1955 and has met a few actors on their way up the food chain.  “Back then, Jack Warner paid the biggest contract players $30,000 a year,” Bockser said wistfully. “Now they want $5 million, and two points on gross…Times have changed.”

But on the Warner Bros. lot, one aspect has remained constant: a passion for movies and a lust for the Oscar. Over 100 Academy Award-winning movies were filmed here. Says Bockser. “We share a passion for the pictures.”