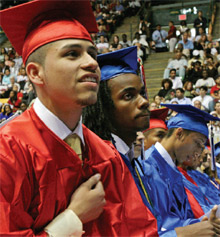 The T.C. Williams class of 2007 is on its way to college, jobs and other postsecondary activities. The 589 seniors received their diplomas last Thursday at George Mason Universitys Patriot Center.

The atmosphere was more like a party than the solemn ceremonial occasion that represents many graduations but the class of 07 seemed to enjoy their moment as they left high school. The one bit of sadness for the graduates was the memory of their classmate, Greg Berry, who died in April of injuries sustained in a Christmas car accident.

Although he is not on the stage tonight, he is with us in spirit, said class president Ariana Appleton.

The featured speakers were valedictorian, Rebecca Lehr and salutatorian, Andrew Vanderhoven. When I was trying to decide what to say tonight, a friend who was with me at lunch suggested that I quote from my goldfish bag. I thought that was pretty silly until I looked at the bag. Perhaps.the makers of goldfish knew just what I wanted to say. The bag read, swim in your own direction and thats what I want to encourage everyone in the class of 2007 to do, Rebecca said.

Superintendent Rebecca L. Perry also encouraged members of the graduating class to take risks. She read a verse from a popular song. So when you get a chance to sit it out or dance, I hope you dance, she said.

Members of the class will attend 70 different colleges and universities, ranging from Brown to Northern Virginia Community College. Twenty-one of them graduated with a grade point average of 4.0 or higher.

You have set the bar very high for all other classes that come after you, said T.C. principal Mel Riddile, who is finishing his first year at T.C.

Finally, the speeches were over and each graduate received his or her diploma. Hats were tossed in the air and the class of 2007 began their celebration.