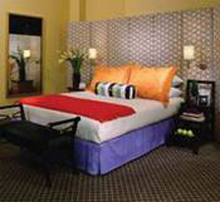 Gaylord Hotels planned opening of the East Coasts largest convention hotel has set off a gold rush of new hotel construction, acquisitions and makeovers in the once sleepy Alexandria tourist-hotel marketplace.

The $1 billion Gaylord National is scheduled to open in April 2008, and local hoteliers are scrambling to compete for whats known in the industry as spillover hotel bookings. Last week, two local hotels were acquired, the Sheraton Suites Old Town and the Residence Inn Marriott Old Town. Just last month the Old Town Hilton, which was acquired for $66 million last year, completed a $4 million renovation of its rooms.

The Procaccianti Group, a Rhode Island-based real estate developer and hotelier, acquired six Sheraton Suites from Starwood Hotels for an undisclosed sum last week, including the Sheraton Suites Old Town, a 247-suite hotel opened in 1990. The hotel includes 3,117 square feet of meeting space, a restaurant, lounge and an indoor swimming pool, as well as a subterranean parking garage.

We intend to invest in renovations and apply our expertise as specialized hospitality owner/operators to unlock further value in the hotel, said Robert Leven, chief investment officer for the Providence-based hotelier, which currently owns 56 hotels in 19 states. Were also pleased to further expand our relationship with Starwood, the nations second largest hotel chain. The Old Town hotel will continue to fly under the Sheraton flag.

A milestone
In another ownership turnover last week, the Residence Inn by Marriott on Duke Street in Old Town was bought by EQUIS Hospitality Management LLC and Syndicated Equities for an undisclosed amount. This opportunity is a milestone for us, Michael Mullenix, CEO and president of St-Louis-based EQUIS, said in a statement. The city of Alexandria is a dynamic community with a need for a quality extended-stay hotel.

The Residence Inn was built in 2003 as an eight-story hotel with 114 studio suites, 108 one-bedroom suites and 18 two-bedroom suites, each complete with a full kitchen and high-speed Internet access. EQUIS will manage the hotel, and for the moment, keeps it flying under the Marriott brand. In the meantime, other Old Town hotels are making sweeping renovations to compete for spillover bookings from the ultra-luxe Gaylord National at Potomac Harbor, where three auxiliary hotels next to the 2,000-room convention hotel are being built.

The Old Town Hotel at 500 King Street is expected to finish its renovations and open as a high-end boutique property, Hotel Monaco, by October. The Hilton Old Town has just finished a sweeping, $4 million renovation which could accommodate a Queen.  It includes expansion of its lobby and lobby bar featuring mahogany wood floors and three HDTVs located in Seagars Lounge,  the addition of a full service Starbucks in its lobby, Couristan carpet in the  ballroom, as well as updated  lighting throughout the pre-function and ballroom space. All guestrooms furniture was renovated to a contemporary design with deep maple solids, maple veneers, brushed nickel accents and glass tops. All rooms received The Bed, a $2,000 upgrade which Hilton designers call the ultimate in sleep design and comfort.

Were very proud of our new look, said General Manager  Kevin Brockway, who said the hotel has already received bookings for 60 rooms for May, 2008, the month after Gaylord National opens.

In other developments, the Hawthorn Suites Hotel in Alexandria has launched a multi-million dollar renovation that covers all-new public areas and significant upgrades to all of the 185 all-suite accommodations. The renovations, that will be completed by Fall 2007, feature a stylish, contemporary dcor and numerous extra comforts and conveniences for business and leisure guests alike. The Hawthorn Suites Alexandria is located at 420 North Van Dorn Street. The renovations are being spearheaded by Old Bayside Partners, LLC and Saunders Hotel Group.

Following the renovations, the Hawthorn Suites Alexandria will provide travelers with a choice of studio, one and two bedroom suites, each with a full kitchen or kitchenette, and all 100 percent smoke free.