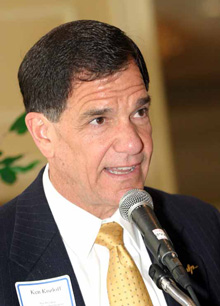 Kenneth Kozloff, the affable and well-regarded CEO of Inova Alexandria Hospital, announced his retirement this week, stepping down from the helm of the region’s second-largest hospital after seven years.  His last day will be June 27.

“At this point in my career, I have decided to explore other opportunities,” Kozloff wrote in a letter this week to his Alexandria Chamber of Commerce colleagues.

Kozloff leaves the hospital during a pivotol period of its growth. The hospital is in the throes of raising $70 million for its ambitious 2010 Project, which will take three years to complete and will add a new emergency wing, neo-natal unit and birthing center, single-patient rooms, nursing stations and a state-of-the-art cancer wing.

Kozloff was known for his dedication to the Alexandria community, serving on various boards and committees, which in turn helped build support for the hospital’s fundraising efforts. He helped raise $2 million annually in public fundraising for the hospital’s expansion,  money which will help after the initial estimate of $70 million was increased by another $14 million in April.
I came to Inova Alexandria Hospital because of this community, Kozloff said. Hospital staff, volunteers, physicians, as well as neighbors and community leaders all add tremendously to the spirit of the hospital and have been instrumental to what weve been able to accomplish during my time here.

Kozloff spearheaded various philanthropy projects and expanding services for patients. Ken single-handedly won over the community when he arrived several years ago, said Joe Viar, chairman of the Inova Alexandria Hospital Foundation.  His leadership was essential in gaining confidence from the city and neighborhood. He has been my partner in tirelessly raising more than $ 2 million per year for Project 2010.

The 2010 Project is a reconfiguration and expansion plan aimed at enhancing the hospitals existing health care services and improving patient access. By 2010, officials predict, one out of four people in Alexandria will be between the ages of 50 and 65, and Inova is expanding health care services most required by the aging community.

The new construction will include approximately 68,000 square feet of space on three floors, two of which will be above ground. This represents a 13 percent increase in square footage for the hospital. The new construction is taking place adjacent to the current emergency department and ambulatory service center. The hospitals renovations and expansions will focus on enhancing its emergency, surgical and cardiovascular and interventional radiology departments, areas which hospital officials see as being most in demand.

Before joining Inova Health System, Kozloff was executive director of Wayne General Hospital, a not-for-profit in Wayne, NJ.  Prior to that, he ran the Cleveland Clinic in Florida.

Ken achieved many notable accomplishments during his tenure at Inova Alexandria Hospital, said Rod Huebbers, executive vice president, Inova Health System. He has raised millions of dollars in philanthropy to support quality care and patient satisfaction and his team has consistently led the system in cost management and in receipt of awards for clinical excellence.

Inova Alexandria, established in 1872, is the second largest hospital in Northern Virginia and is the largest private employer in Alexandria.

About Alexandria: The development test

Out of the Attic: Robert Prettyman and Friendship Firehouse’s hose carriage