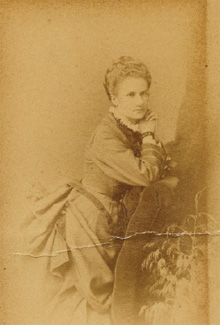 Mary Custis Lee was a world traveler and an influential figure in the post-war south because she was the daughter of Robert E. Lee, but not much more was known about her life. The discovery of two trunks full of papers and historical documents in November 2002, gave historians a greater sense of this figure in U.S. history.

Historians will get a glimpse into the Lees history on May 24, as the contents of two old steamer trunks are unveiled in Richmond at a lecture by Elizabeth Brown Pryor, a noted historian and the author of Reading the Man: A Portrait of Robert E. Lee Through His Private Letters.

The trunks, which belonged to Mary Custis Lee, contained 21 archival boxes of items relating to family history, the death and funerals of her parents, items relating to her grandparents – George Washington Parke Custis and Mary Fitzhugh Custis of Arlington House – and items relating to Robert E. Lees military career. The contents also reveal much on the female members of the family including their education, religious life and pre-Civil War involvement with the American Colonization Society on the financial support of freed slaves.

In terms of sheer quantity of material, the greatest portion of the collection concerns Mary Lee Custis herself, a world traveler in the late nineteenth century and a person whose influence, because of whose daughter she was, was great throughout the south, said E. Lee Shepard, the director of manuscripts and archives at the Virginia Historical Society in Richmond, who responded via email.

Robert Lee IV is a direct descendant of Lee and currently on the board of directors at Burke & Herbert. Lee is anxious to find out the trunks contents as well. Im sure it will be tremendous for the historians to patch some holes in their history, he said.

Burke & Herbert
The trunks were discovered in the basement of the Burke & Herbert Bank on King Street in November 2002. Bank President E. Hunt Burke found the trunks with Rob E. L. deButts, a great-great grandson of Lees. Burke remembers finding the trunks in the silver vault at the bank. They were kind of beat up old trunks, he said. The whereabouts of the actual trunks is unknown to Burke, but the significance of the papers, is the important part of the finding. It took two years for the Virginia Historical Society just to categorize the contents, he said.

When the trunks were found, with M. Lee stenciled on the side, they were opened and the contents leafed through to get a sense of the contents. One of the things Burke remembered were the love letters from Lee to his future wife. The historical material filled some of the chronological gaps in the life of Lee and his daughter. The initial opening was videoed as well to record the event.

Lee hopes the written record in the form of letters will be of value. They all wrote and they all wrote well, he said. With letters, Lee noted that you get a great sense of their character.