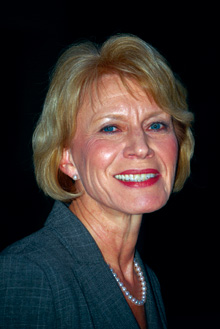 After two hours of closed-door deliberations, Alexandria School Board members voted 5-4 Monday night in a special session not to renew Superintendent Rebecca Perry’s contract when it ends in June 2008.

In a climactic end to a week of rumors, accusations and guessing games, the nine elected school board officials emerged  from a closed meeting at ACPS headquarters at Mark Center and member Yvonne A. Folkerts, who has not discussed her views on Perry, proposed a motion not to extend the superintendent’s employment contract.

“She’s achieved a record of many important accomplishments and the entire community can take pride in these accomplishments,” said Board Chairman Arthur E. Peabody, Jr., who voted for Perry’s ouster. “But for me, we will benefit from new ideas, strengthening the curriculum and a fresh perspective for the students.”

The board was obligated to notify Perry by Dec. 31 of their decision, but in a May 9 private meeting with Perry, Peabody and Vice Chair Blanche D. Maness reportedly told the schools superintendant that some members were pushing for her to leave. Word soon filtered out that five of the nine members did not want her to stay, which was not enough votes to protect her job.  “Ms. Perry is not being fired. She’s not being terminated. This was a personnel decision,” Peabody added.

Voting against the motion not to renew Perry’s contract after June 30, 2008 were members Sheryl Gorsuch, Charles Wilson, Eileen Cassidy Rivera and Ronnie Campbell. Most spoke glowingly of Perry’s achievements during her six year term, and were critical of the fast-track process exercised by the board.

“I’m deeply troubled by the rushed nature of this vote,” Rivera said. “We have yet to fully deliberate this issue. I certainly will not be able to answer the question tomorrow in my child’s carpool line, ‘why did this happen?”

Rivera said that a performance standard should have been developed to quanitify the superintendent’s progress. “I have to say I’ve never heard of putting a good superintendant to work without a performance matrix,” she said. “This is a practice not becoming of Alexandria.”

Gorsuch agreed.  “I regret that we are not providing for adequate public input,” she said.  “I don’t believe a change in leadership is needed at this time. [Perry] has demonstrated results on every student achievement level and she’s built a strong team which works well together.”

Campbell said she began working with Perry in 2001 as a PTA leader and at the time marveled at the team she had assembled. “We have not always agreed, but I feel she has always been open and honest with me,” she said.

Cambell added, “The priorities of this board should be re-evaluated.”

$50,000 in search costs
The costs of finding a new superintendant are estimated at $50,000, and some members said they were fearful that the circumstances surrounding Perry’s ouster might be damaging to the search.

The superintendant manages 18 schools with an operating budget of $182 million and a capital improvement budget of $97 million. Some 10,057 students are enrolled from 88 different countries, and speak 69 native languages. Aftrican Americans and Hispanics comprise about 69% of the student population, and 52% of students are eligible for free or reduced meals.

Assistant Superintendant John Porter, a 38-year veteran of the school system, lauded Perry for improvements to the quality of public education in Alexandria. He cited the increase in SAT scores, the jump in number of fully state-accredited schools from two to 14, the number of schools meeting state requirements for Adequate Yearly Progress, improvements in the minority achievement gap and the dramatic turnaround of the once-failing Maury Elementary School.

Porter, like others at the meeting, sounded puzzled by the turn of events. “I’ve heard from a lot of parents over the last week who’ve said, ‘why now?’ and ‘Isn’t this disruptive to the system?” he said. “I can’t think of other times when we’ve had the academic successes than in the last few years. Things are pretty good.”

Member Charles Wilson said he was “vigorously opposed” to changing course. “My concern is transparency,” he said. “Too much comment can be helpful. We need to make sure of the direct and indirect costs of making such a decision. It is not useful or productive that we as a community go on and on about something that’s already a done deal.”

Dissenting members were thin on reasons why they chose not to renew Perry’s contract, and afterwards most directed reporter’s questions to Peabody. Only one dissenting member, Scott Newsham, chose to comment, saying it was “time for new leadership at ACPS..”

Board members Maness, Folkerts and Claire M. Eberwein refrained completely from commenting on Perry or their reasons for not renewing her contract. Afterwards, Eberwein simply called it a “personnel matter.”

Peabody told a reporter after the meeting that Perry had “done a good job” and that he was “doing this in a very positive manner.”

But, he added, “After seven years it was time for new perspectives, new ideas and fresh decisions, unencumbered by the past.”

Perry, who left before the board rendered their decision, said that whatever the board decided, she’d accept it. “My contract’s up in a year and it’s been a wonderful community to work in,” she said. “Leaders sometimes have to make tough decisions, and at times my decisions were not the most popular ones. But I can’t help but be proud of the wonderful achievements I’ve made here.”

When Perry arrived from the superintendent’s job in Mecklenberg County in 2001, only two of Alexandria’s 16 schools were accredited. “Now, seven years later, only two of the 16 are not accredited,” she said. “I’m very proud of that accomplishment.”

Perry said she had two offers of employment on Monday, but said she promised to fill out the last year of her contract. She said she was leaning towards retirement after June, 2008.