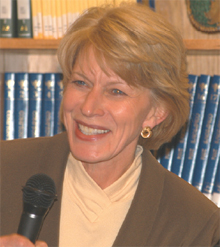 Five members of the Alexandria School Board have apparently decided not to renew Superintendent Rebecca L. Perrys contract when it expires in June, 2008. No vote has been taken and many questions remain unanswered.

The discussion began months ago but became public after Board Chair and Vice Chair, Arthur Peabody and Blanche Maness, met with Perry on May 9. I have been talking with many board members and five of them have made it clear that they do not wish to renew her contract next year, Peabody said. I met with Mrs. Perry last week as a professional courtesy, just to let her know that we were going to be discussing this matter and what I had been hearing.

Last Thursday night, the board met in executive session. I certainly cannot reveal what we discussed but will confirm that renewing the superintendents contract was on the agenda, Peabody said.

On Friday, parents of ACPS students and PTA presidents got calls from elementary school principals informing them that the board had voted not to renew Perrys contract and that PTA members were being encouraged to lobby the board to keep Perry in her current job.

I spoke to parents and to PTA presidents on Friday and I was very concerned, said Board Member Claire Eberwein.

Eberwein wrote an email expressing this concern to the School Board and to all members of the senior administrative staff. I have heard from several parents that senior administrative staff (identified by the callers) were directed by the superintendent to contact principals and ask them to contact PTA presidents to indicate that the board met last night and voted not to renew Ms. Perrys contract and to ask them to lobby the board with regard to the renewal or nonrenewal of Ms. Perrys contract. The session called was a legally called executive session and contract negotiations between the superintendent and the board are a private legal matter. The use of senior staff and principals to conduct private business on behalf of the superintendent is not a legitimate use of their time and is not in their job description the email said.

A response
Perry responded via email, denying any involvement in calls made by principals to parents. This is plain and totally 100 percent untrue! I have not directed suggested, asked or encouraged ANYONE to lobby anyone NOR have I even informed any principal NOR do I have ANY knowledge of anyone talking to principals or PTA presidents. If, in fact, you heard from several unidentified parents that I directed anyone to do any such thing, I can assure you that that is totally untrue. Frankly, senior staff is pretty lean around here today as Cathy, John, Kris, Leslie, Margee are all on leave (for a number of different reasons.), Perry wrote.

John Porter, longtime T.C. Williams principal and now an assistant superintendent of schools, also denied any involvement. I was not instructed by the superintendent to contact principals nor have I spoken to any principals about this situation. My experience in Alexandria has been that information of this sort does get out, though, and not necessarily through administrative staff Porter wrote.

Cathy David, deputy superintendent for Curriculum and Instruction, also denied any involvement. Please be assured that Mrs. Perry did not instruct me or anyone else that I know of to contact anyone about the information that was given to her last Wednesday by Mr. Peabody and Ms. Maness concerning her future employment in ACPS. However, I am disheartened to learn of the decision that has been made by five of the nine members of the board, as I strongly believe that a change in the leadership of the School Division will negatively impact the gains in student achievement that have been made over the last six years David wrote.

No comment
Kris Clark, executive director of elementary education, also responded to Eberweins email. I have not been directed by the superintendent or anyone else to talk to principals. I chose to call principals and tell them of the board decision, which was shared with Mrs. Perry last Tuesday, and was not secret. Nor was it a private matter. Principals and PTA presidents have the right to know the actions of their elected School Board. All who are vested in the city and the School Division have the right to know, Clark wrote.

Asked what he thought of Clarks involvement, Peabody replied, This is a personnel matter and I will have no comment.

Ethics in question
Peabodys meeting caused some board members a problem. I think he should have met with all of us before he had such a discussion with Mrs. Perry, said Charles Wilson. Nine people were elected to serve on the School Board and all nine of us have a right to be involved in the government of the public school system. By not talking to all of us, the chairman has effectively eliminated four of us from the process.

This isnt about whether Mrs. Perry should stay or go. Its about the process and, I think what the chairman did was unethical, Wilson said.

Peabody disagreed with Wilsons assessment. I dont believe I did anything wrong, he said. I didnt ask for her resignation or tell her that she was being fired. I simply shared with her what I was hearing from board members and let her know that we were going to be discussing the matter in executive session. If we are not going to renew her contract next year, we need to begin a search for a new superintendent. If we are going to involve the community in that search and get the best possible candidates, we need to begin the search process over the summer. I honestly thought I was being nice. Thats why I met with her, Peabody said.

Eberwein is the only member of the current board who has participated in a superintendent search. When we did the search for Dr. [Herbert] Berg, it took us about a year, with the advertising starting in September. The superintendent had resigned after the results of the 1994 election, which some saw as a mandate on the way the schools were being run. We appointed a qualified internal staff member as acting superintendent while we engaged in the search.

It is best practice that if one is going to engage in a search that involves the public in a meaningful way and seeks to choose from the very best candidates available nationally then you should start with public surveys seeking public input in the spring prior to the year the new administrator will begin the job. That would mean now, Eberwein said.

Perry came to Alexandria from Mecklenburg County, Virginia, in 2001, when Berg left to take a job directing international schools.  The number of schools obtaining accreditation under the Virginia Capital Standards of Capital Learning has risen dramatically. She is also credited with implementing the laptop initiative, which provides computers to every student in grades 9-12.

Perry was contacted by email and did not respond to requests for comment for this story.