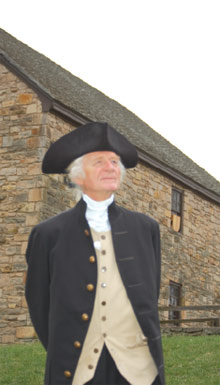 Who would have known it?  As the historic interpreters at Mount Vernon tell it, our nation’s benefactor, our top war general, founding father and first farmer was also one of the Colonial period’s foremost entrepreneurs.

George Washington had his own distillery.  And a profitable one, to boot. “I am the president of the United States and this is my whiskey,” Washington announced to visitors last Saturday at the grand re-opening of his newly-reconstructed still.

Mount Vernon officials claim the distillery is the only one in the nation, and possibly the world, that authentically demonstrates 18th-century distilling techniques.
Washington erected the distillery in 1797, and by the end of his first year, was producing nearly 11,000 gallons and commanding nearly 60 cents a gallon for his hooch, making it among the largest whiskey distilleries in early America. He sold it for $7,500, the equivalent of about $300,000 today.

“We made a clear profit that first year,” recalled Washington proudly. “At first we had only two stills, but once we saw the demand, we bought three more stills and the need outstripped the grain supply…We actually had to buy more grain to satifsy the need.”

James Anderson, a Scotsman who was Washington’s farm manager, convinced Washington to build a larger distillery a few months later, and the distillery was finished in March 1798.  But after Washington died in 1799, his whiskey business took a swoon, and within a decade, the building fell into disrepair. In 1814, it burned to the ground.

Archaeological work began on the structure and nearby gristmill in 1997. Historians found the remnants of five copper pot stills, with other artifacts that gave hints as to how the distillery worked.  Several years later, a $2.1 million fundraising effort was launched to re-create the colonial still and make it operational for visitors.

Last week, after a 200-year absence, his distillery began operating again, bubbling, cooking and distilling the same kind of whiskey that made him one successful whiskey producer in his presidential retirement years.  “I thought we’d never get it rebuilt,” said Washington, played by the actor Dean Malissa. “It was a decade of digging.”

The recreated distillery was reopened in style on Saturday, with visitors treated to strolling 18th century period musicians, open-hearth cooking and costumed distillers and millers operating the water-powered machinery.

But sorry, no free samples.  Back in February, around Washington’s 275th birthday, the House of Delegates voted to allow Mount Vernon to sell up to 5,000 gallons per year of Washington’s corn-and-rye concoction as commemoratives, but the first sale will not occur until July 1.

Visitors can tour the site on Route 235 separately ($4 for adults, $2 for children), or as an optional part of the Mount Vernon tour.