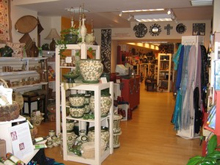 What does it mean to trade fairly?

Ten Thousand Villages in Old Town was no exception. It  has been an important member of International Fair Trade Association since 1946, and the store in Old Town, managed by Judy Hugh and Rose Bierce, has been trading fairly since 1994.

World Fair Trade Day was first established by the International Fair Trade Association in 2001, in order to raise worldwide awareness of Fair Trade. Since then it has been an important and influential day for merchants and buyers alike.

This is a major problem with conventional trading, or the way that most organizations do business, because most artisans, especially those in third world countries, are treated the as the lowest priority, and are seen as the bottom of the economic ladder. Fair Trade ensures that these artisans are treated fairly, and paid well for their unique skills. It also ensures that women artisans are paid the same amount as men. Fair Trade is also extremely anti-sweat shop, and environment friendly.

In their celebration of World Fair Trade Day, Ten Thousand Villages dedicated a week to honor fair trading, which included several events and guest speakers. On May 12th, Toby Christensen performed live on the djembe, a drum made by artisans in Ghana. Christensen also helped to raise money to help plant more trees in which the djembe are constructed from, because their own natural supply of trees has been exhausted.

This Friday, May 18th, Ecuadorian carver Albert Lopez will demonstrate how he carves tagua nuts into exquisite pieces of jewelry and ornaments. The tagua nut is also called “vegetable ivory” due to it’s remarkable similarities with actual ivory. Lopez will be carving at 6:30 p.m., at Christ Church, on N. Washington Street. Lopez will also be at the store from 4-6 p.m. to talk with customers about fair trading.

The final event for the celebration of Fair Trade Day will feature author Jacqueline DeCarlo, who will be present the whole day in Ten Thousand Villages to discuss the recent growth of fair trade and how the campaign can grow from here. Her most recent book, Fair Trade: A Beginner’s Guide will be available and she will be signing copies.