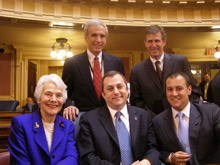 It was a moment of sheer pomp and circumstance. Not quite the white tie and tails State Dinner held at the White House Monday, but a moment of great regal bearing — the Queen of England returning to Virginia after some 50 years and addressing the nation’s oldest legislative body.

“It was a very magical moment,” said House of Delegates Speaker William Howell (R-28,Fredericksburg), who sat behind Queen Elizabeth II as she addressed the State Assembly in Richmond’s newly-reopened Capitol Building. “I consider myself a real Anglophile. My mother was born in Essex, so I’m half from the native country. So meeting her twice in one day was a great honor.”

Howell was one of a small handful of state officials, including former governors, lieutenant governors and the like, who were invited for tea with the queen in the Governor’s Mansion beforehand, hosted by Gov. Tim Kaine and his wife, Anne Holton.  Like everyone else, he bowed to royal protocol and waited for the Queen to extend her hand. A few of the women courtesied. The British monarch, however, did not pose for photos. “Pleased to meet you,” she said elegantly to well-wishers.

Afterwards, the queen and Prince Phillip strolled the Capitol Grounds, waving to a crowd of about 7,000, with most state employees enjoying the day off provided by Gov. Kaine. The day off with pay gesture reportedly cost the state $11 million.

On the steps leading to the State Capitol, the queen passed an honor guard which included 11 members of the Virginia Tech Corps of Cadets, attired in crisp blue and white dress uniform and sabers. Normally the cadets would number 12, but a gap was left because of the the loss of Matthew La Porte, 20, one of the victims of gunman Cho Seung-Hui’s killing spree. La Porte was a member of the US Air Force Reserve Officers’ Training Corps. A visit by the queen to the Virginia Tech campus at Blacksburg was ruled out by planners.

In a six-minute address to the General Assembly, the queen expressed Great Britain’s “deepest sympathies” over the Virginia Tech massacre, the deadliest school shooting in U.S. history. “As a state, and as a nation, you are still coming to terms with the dreadful events at Virginia Tech,” she said. “My heart goes out to all those who have been affected.”

The queen held a private meeting with two of the survivors of the campus rampage two weeks ago, which left 32 students and teachers dead.  “On behalf of the people of the United Kingdom, I extend my deepest sympathies at this time of such grief and sorrow,” the queen said.

“It was a very heartfelt condolence,” said Del. Adam Ebbin (D-49, Alexandria), who represented the state in a Dec. 2006 planning visit to London. “It was nice to see Virginia in the news in a positive way, and it was nice after a three year restoration of the Capitol to be able to show it off.”

While the huge crowd in Richmond watched the queen’s every moment on giant closed-circuit Jumbotrons set up for the occasion, the majority did not greet or even catch a glimpse or of the queen personally, who was separated from the crowd by security barriers.  Indeed, the crowd was 23,000 less than estimated.

It was his son’s fifth birthday, and Moran had a pre-arranged engagement to dress up as Darth Vader.