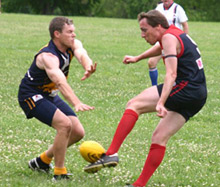 It is a brisk Saturday morning but those brave souls willing to get out of bed are excited to put the footy boots on, kick some goals and have some fun.

Ausball, is a version of “Rec Footy,” developed for the U.S. It is a 9-a-side game played on a  smaller oval (100 yards in length) with no tackling and various  rules to encourage coed participation. No previous experience is necessary. Just some running  clothes, maybe a pair of cleats or sneakers and plenty of  enthusiasm.

This is the third week of the Baltimore Washington  Eagles experiment with the Ausball concept.

The first week was an unmitigated success with 40 people showing up including 20 people new to the game. The second week had low turnout as Washington DC’s  Cherry Blossom Festival drew huge crowds and made parking near the  Tidal Basin impossible.

After that “stuff up,” the Eagles worked to book a field in Alexandria (not easy during Spring Break). While not  as many as the first week, there are
enough for three teams to play  two games – a pretty impressive effort given the snow and cold and  the fact that many have left DC for the Easter Weekend.

Denis  Ryan, USFooty Kids National Director and BW Eagles founder, is pushing the development of Ausball in the DC area and umpiring the  first game. Ryan sees a great opportunity for footy to fill a void  in participatory sports that occurs in the US after high school and  college. According to Ryan, there has been a huge upswing in  organized coed sports that combine participation and socializing.

In  Baltimore, where Ryan lives, Flag Football (American) has grown  tremendously in the last few years and the play-yard game of “kick ball” has also had tremendous success. According to Ryan, “Ausball  is a great way to introduce the game and get a lot of people that  have been sitting on the fence involved in the game and in the Club.  Some will want to try the next step and play in the Metro games or  for the Eagles or others will become fans of the game.”

I  talked with Amy Bishop, wife of Eagle’s Head Coach Matt Bishop, who  was sitting in the car trying to stay warm before the game. Bishop  is currently the leading goal kicker with the DC Punishment.  Australian, but a Rugby Leaguer by upbringing, Bishop is relatively  new to the sport and enjoys the Ausball concept. “It has been great.  Lots of brand new players including lots of new girls came down the  first week and really enjoyed the game.”

Bishop thinks that some of  the rule changes are important. “Having the rule that requires the ball go through a girl in the forward half means that the boys don’t just run a way with the ball.”

The Eagles have three more weeks of their first Ausball season. It really looked like a lot of  fun. I might even be willing to dust off my footy boots and have a kick.

A video companion piece can be viewed on youtube: WFN Ausball  4/7/07 (http://www.youtube.com/watch?v=xUK8BXcxYiE)