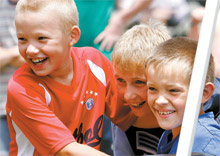 It is little more than a tragic footnote of history now: the accident at the Chernobyl Nuclear Power Plant on April 26, 1986.

A massive explosion at the plant in Ukraine that day caused a plume of radioactive fallout which drifted over parts of the western Soviet Union and areas of eastern, western and northern Europe. Due to the prevailing winds at the time, about 70 percent of the radioactive cloud wafted across nearby Belarus, resulting in the evacuation and resettlement of 336,000 people, eventually killing thousands and contaminating hundreds of thousands more, even those born long after the 1986 incident.

Last week, 19 Belarussian children who re-settle for the summer into the comfortable homes of Alexandria host families said they know little about the worst accident in the history of nuclear power: How it devastated the economic, physical and mental health of their landlocked Eastern European nation, permanently contaminating their ground water, fruits and vegetables. The incident is not taught in their schools as the government brushed this history under the soil.

I dont know anything more about Chernobyl than what my mother once told me, said Denis Shukaev, a smiling 11-year-old from the poor farming village of Droghin, Belarus. Were taught to peel all our fruit and vegetables and to drink only bottled water.

Shukaev was sitting in the dentists chair in the Old Town office of Dr. Eddie Longman, one of 11 local dentists who treat the visiting children each summer for cavities, root canals and rotting teeth, dental conditions caused by either the radioactive contamination or the unavailability of quality dental care back in their country. Everyone is so friendly here, he says, as Longman checks his teeth for cavities. I look forward to this every year.

His sister Veronika, 13, chimes in, The houses in Alexandria are bigger than at home. And in Belarus, we dont have swimming pools in houses.

Longman, whose grandfather came from Latvia in 1902, donates all of his dental services to the children. It seemed like the right thing to do, he said. Some of their teeth are rotting when they get here. We fix their cavities and we fix their teeth. The fluoride really helps, because each consecutive year they get better.

Different lifestyle
The annual six-week summer visit to Alexandria, sponsored by the New York-based group Children of Chernobyl, is funded by private gifts and supported by host families who are parishioners of Christ Church of Old Town and St. Johns Church in Franconia. The children, between the ages of 8 and 14, travel with a chaperon, Olga Nijhiviniskaia, a language professor at the Linguistics University of Minsk, who serves as both their translator and legal guardian.

This shows them a completely different life, Nijhiviniskaia says. Most of these children come from small villages and their parents are not educated. Here in Alexandria they see they can reach something in life through hard work.

Kate Van Dyck, the Alexandria host coordinator who is a school teacher in Prince Georges County, said the children enjoy frequent trips to the swimming pool, excursions to amusement parks like Kings Dominion, and picnics with other host families, such as the one held Saturday in Springfield. The children go back home with suitcases full of new warm clothes to help brave the cold Russian winters, as well as cough syrup and other medicines. Shopping trips to Target, Wal-Mart or other big retailers are discouraged. We dont want them to see us as a materialistic society, Van Dyck said.

The six weeks of rest and recuperation helps the children strengthen their immune systems that have been weakened by prolonged exposure to the contaminated environment and food in Belarus, Van Dyck said. The children arrive with little more than the clothes on their backs and speak no English, she said. They leave up to 7-10 pounds heavier, with clothes and medicine for their families, and even having learned a little English.