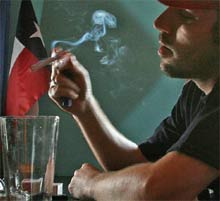 Alexandria is one step closer to becoming the first jurisdiction in Virginia to ban smoking in restaurants. City Council unanimously passed the text amendment to the citys zoning ordinance on Saturday, June 16 and must reenact it in the fall for it to become law July 1, 2008.

We hope that the General Assembly does the right thing and passes a statewide ban on smoking before this takes effect, said Mayor Bill Euille. By passing this text amendment, maybe we will get their attention.

Pros and cons
The decision was controversial and brought 25 speakers to Council chambers to express their opinions. Lining up against the ban were the Alexandria Chamber of Commerce, restaurant owners, individuals who feel that zoning law is not the proper way to regulate tobacco use and smokers.

Alexandria already has a reputation for not being business-friendly and our Special Use Permit process is already an albatross around the citys neck. Dont make it worse by adding a smoking ban to it, said Rick Dorman, chairman of the Chambers Board of Directors.

Another speaker, Annabelle Fisher, who said she does smoke cigarettes said, I am an adult and I have a right to choose whether I smoke or not and I have a right to choose what restaurant to patronize. Besides, the data on secondhand smoke is not conclusive. As a matter of fact, a comprehensive, 39-year study found little effect from secondhand smoke, she said.

Virginia is a Dillon Rule state, meaning that localities have only the authority that is specifically delegated to them by the General Assembly. We have the authority to regulate alcohol through the land use process and I believe that case law clearly supports our authority to enact a smoking ban in restaurants, said City Attorney Ignacio Pessoa. We certainly may be sued but I believe that precedent indicates we have a very good chance of winning.

A choice
Alexandria has a voluntary no smoking program called Proud to be Smoke Free that is administered by the health department. I did some checking and, of the 165 restaurants in the city, 120 of them participate in this program, said Pat Troy, owner of Pat Troys Irelands Own. Leave the rest of us alone. People deserve a choice.

If Council reenacts the law next fall, it would become law on July 1, 2008. However, while some restaurants would have 90 days to comply with the new ordinance, restaurants who have invested in new heating and air conditioning equipment to filter smoke would have five years to come into compliance. If a business decided not to comply, that business would be designated a nonconforming use and would have seven years to remedy that situation or close.