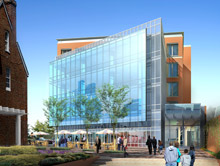 Carr Properties has received the green light from City Council to develop its proposed project at 1701 Duke St., at the historic Edmonson Plaza.

The five story, 115,000 square foot “trophy quality” building will include ground floor retail and underground parking and is located at the King Street Metro station in Old Town.

Edmonson Plaza was named to commemorate the dramatic story of Emily and Mary Edmonson who were held for a brief period in the 188-year old historic building at 1707 Duke, which served as a holding facility during the slave trade era. After the infamous “Pearl incident” in which the two sisters were captured as part of a larger group of slaves attempting to flee to the North on the schooner Pearl sailing down the Potomac River, Emily and Mary were later emancipated from slavery.

Mary died within a few years of receiving her freedom, but Emily became a well known educator and human rights activist who worked with the leading abolitionist Frederick Douglass. Their life experiences served as the basis for several of the characters in Harriet Beecher Stowe’s “Uncle Tom’s Cabin,” widely considered one of the most important novels of the 19th century.

The new building is being designed by SmithGroup, Inc. of Washington and will be a departure from the more typical masonry buildings in the city. The building has been designed in keeping with current LEED standards set by the US Green Building Council and will feature a modern design including a dramatic floating transparent glass plane facing the historic building.

The balance of the facade will be comprised of brick with punched windows and metallic bays. A public plaza will be built between the new and historic buildings and will feature outdoor seating and a commemorative element to pay tribute to the historic nature of the site.

“It will be one of the most desirable office buildings in Alexandria due to its outstanding architecture, urban plaza and easy access to Metro,” said Oliver Carr III, the CEO of Carr Properties. “We believe the key to the project’s success has been in addressing the property’s historical significance respectfully. We’re proud to be delivering a quality project that will add to the fabric of Alexandria for years to come.”

Carr expects to break ground by year-end with delivery set for mid-2009. Carr’s company currently owns or has interests in a portfolio of 26 commercial office properties containing over 3.6 million net rentable square feet.