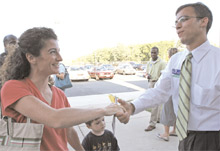 The race is now set for the City Council seat left vacant when Vice Mayor Andrew Macdonald resigned in May. Alexandria Democrats selected Justin Wilson to run against former councilman and Vice Mayor William Cleveland in the July 17 special election.

We made a lot of phone calls and mailed a couple of pieces to people who were the most likely to vote in a caucus, Wilson said. I am grateful for all of the support I received and am looking forward to the campaign ahead. I am going to continue to focus on the issues I talked about before the caucus transportation, the fiscal health of the city and making children a priority, Wilson said.

Wilson holds a bachelors of science degree in Information Systems from Virginia Commonwealth University, and is a graduate of the Sorensen Institute for Political Leadership at the University of Virginia. He is employed by the National Railroad Passenger Corporation (Amtrak) as a senior information technology systems engineer. He lives in the Del Ray neighborhood of Alexandria with his wife, Alex, and their son, Eli.

Wilson is the chairperson of the Alexandria Transit Company Board of Directors, which operates the citys DASH bus service, and currently serves on the City Council-appointed citys budget committee (Budget and Fiscal Affairs Advisory Committee).He also served two terms as president of the Del Ray Citizens Association. He was an appointee of Governor Mark Warner to the states Advisory Committee on Juvenile Justice, and is a current appointee of Governor Tim Kaine to the Virginia Board of Juvenile Justice.

Wilson is also active in Alexandrias nonprofit community as treasurer and a member of the board of directors of Computer C.O.R.E., which provides computer training to low-income adults in Northern Virginia.

In addition to his community and public service, Wilson is a leader in the Democratic Party. He is the Vice Chair for Organization and Technology of the Democratic Party of Virginia, is a member of the 8th Congressional District Democratic Committee and is a former deputy chair for precinct operations for the Alexandria Democratic Committee (ADC). Currently he serves as the Leadership Circle chair for the ADC, a fundraising post that raises money to fund the full-time office and headquarters on North Washington Street.

All in a days vote
We were very pleased with the turnout but had no way to predict what it was going to be ahead of time, said Susan Kellom, chair of the Alexandria Democratic Committee. Every caucus has a personality of its own and, in the case of a special election, theres just no way to compare it to anything else that has happened before.

Things generally went smoothly except that some would-be voters objected to signing the pledge to only support the candidate chosen by the Democratic caucus. There were some who believed that they did not have to sign this pledge, Kellom said. We had attorneys working throughout the caucus who explained to those people that this was a Party caucus to choose a Party candidate and that, as such, we established the rules of participation, Kellom said.

Between now and July 17, there will be a number of opportunities for the public to learn more about Wilson and Cleveland. Kellom and Chris Marston, chair of the Alexandria Republican City Committee, are coordinating candidate forums. We are going to hold a forum in the central part of the city, in the West End, two in the East End of the city and one for the business community, Kellom said.