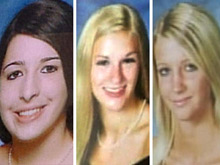 A Thursday night car crash has left four people dead, including two teenagers who had graduated from high school less than eight hours before. One passenger, a 17-year-old senior is being treated at INOVA Hospital.

Virginia State Police were at the scene at about 10:40 p.m. Thursday night and found the remains of a 2002 Volkswagen Cabriolet convertible and a ruptured fuel tank from the 2007 Freightline tractor trailer that the Volkswagen had crashed into. According to police, alcohol may have been a factor in the crash, but the amount or what kind that was found was not released. The 42-year-old driver of the tractor was not injured.

Police said the girls drove up I-495 West just before the Springfield Interchange. Meaning to get on the I-95 South ramp, the convertible pulled into the safety zone and in an attempt to swerve into the exit lane was hit by the tractor trailer. The convertible careened into a concrete retaining wall and overturned. The speed the car was traveling at the time has not determined, but police said three of the girls were ejected from the car and that all four died at the scene.
According to Fairfax County police, the driver of the tractor trailer could not stop his vehicle in time.

The 17-year-old surviving victim, Jena Rexoat, is recovering and is receiving visitors at the hospital.

Thackston, of Troy, New Hampshire, was studying foreign languages. GMU spokesman Daniel Walsch said that there will be no ceremony for her.

“It’s the summer time and there aren’t that many people here,” Walsch said. “But in the school year when tragedies like this have happened, we have had vigils. But this has no bearing on her character or the kind of student she was.”

West Potomac student Ashley Johnson was a cheerleader with Petkoff and said of her friend and Shelkin on facebook, “She (Shelkin) was the life of the party and everyone will miss having them both around.”

Graduate Kim Schreiver,18, said that she had been to a party with the girls before the crash and had considered going with them to a nightclub named “Love” in D.C.

Graduate Stephanie Talbot had followed the five girls on I-495 and witnessed the entire accident. Talbot called 9-11 and helped the police piece together what happened. Crying and shaking, she said, “I (expletive)ing saw bodies on the road.”

Standing near the posters of tribute at the candlelight vigil at West Potomac Friday night, Renee Shelkin’s boyfriend of three and a half years, Corey Wright, 20, said, “She had it all She had it all. She was happy. She was graduated and was going to (Virginia) Tech.”

The last that Wright had seen of Shelkin was after graduation, where she had dinner with her family before going out to post graduation parties.

“I didn’t know people like that existed before I met her,” Wright said.  “I would trade a thousand people for her.”

Graduate Brendan Keane, 18, said of Ashley Johnson, “She was one of those generally great people. If you ever had had a problem, she’d help you before she’d help herself.”

As part of school tradition, all of the graduate girls were going to leave on Saturday, June 16 with a large group of friends for Beach Week at Nags Head, North Carolina.

“People are actually considering going to the beach. How can you do that, I asked them. There’s no way in hell you can just drink that away. It’s not a party. It’s a sobfest. We don’t even know when the funeral is,” said Schreiver.