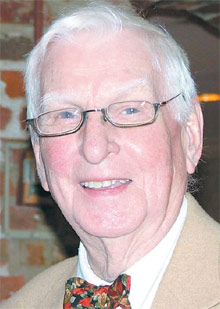 They came to show respect for a man who lived his entire life in Alexandria. Mostly they came because Jack Ticer was one of a kind and his death has left a void that cannot be filled.

St. Pauls Episcopal Church was packed with those who knew Jack Ticer for many years and others who knew him for a short time. However long they knew him, he left an impression.

John Jack Tennessean Ticer was born in Alexandria in 1923 to parents who were also native Alexandrians. His father, Edmund Ticer, served as the citys mayor during the Depression, and taught his son his first lessons about service.

His life reads like a chapter out of Alexandrias history. He attended grade school for some time at the old Alexandria Academy, which George Washington funded. As a freshman he entered a brand-new school, George Washington High School, from which he graduated in 1940. His son, John Ticer Jr., said that was where Jack volunteered for his first service.

He was the manager of the George Washington High School football team, John said at the Sept. 4 memorial service. And that was just the beginning.

World War II interrupted Jacks studies at the University of Virginia for three years. He was so reluctant to speak about himself that I didnt know until after his death that he served on the front lines in Germany and witnessed the Nazis surrender, John said.

After earning a degree in engineering from the University of Virginia in 1948, Jack went to work for Westinghouse and then Atlantic Research. He first ran for office in 1955 and was elected to the Alexandria City Council. In 1956, he married Patsy, now Virginia Sen. Patsy Ticer. The couple celebrated their 51st anniversary in July.

Even though he was very ill, he had a jeweler visit him at Woodbine and surprised Mom with a butterfly brooch, John said.

Jack Ticer served two more terms on City Council, from 1964 to 1970. Then he became the clerk of the U.S. Senate Armed Services Committee and, in 1981, joined the staff of the Department of Defense Inspector General. He retired in 1995.

As a politician, he worked tirelessly for racial integration, urban renewal and historic preservation. When he could no longer participate in politics because of his job, he was a cheerleader for Mom from the sidelines. He was a member of the Board of Control that was responsible for the creation of George Mason University and he served on their advisory board for many years, John said, adding that his father was proudest of this political accomplishment.

St. Pauls was an integral part of Jack Ticers life from beginning to end. He was baptized and married there, his children and grandchildren were baptized there, and his son John was married there.

For most of his 84 years, he was strong and healthy. He suffered only a short time and when he died, he was ready to go, John said.

Jack Ticer died at Inova Alexandria Hospital on Aug. 29, from lung disease. He was a true Virginia gentleman from old Alexandria.