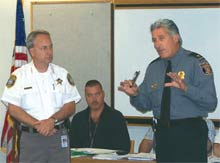 In a massive five-day joint effort, Alexandrias police and sheriffs departments have cleared city streets of 61 felons and arrested a total of 88 people with outstanding warrants.

The command post was set up in the sheriffs office and close radio control was maintained with the task force members. Beginning at five oclock in the morning and concluding at 9 p.m., the teams rounded up a total of 61 violent felons and found another 27 already jailed in Alexandria and surrounding jurisdictions.

The people of Alexandria have every right to be proud of their police and sheriffs departments, said Chief Baker.  Our teams worked flawlessly last week, rooting out the felons and ridding our streets of these individuals.

Successful sweep
Sheriff Lawhorne was equally enthusiastic at the success of the joint warrant sweep.

Our teams zero in on the most serious offenders. They developed detailed files on each of the offenders, tracked down addresses and were able to find them.  It took time and effort but our teams determination paid high dividends, Lawhorne said.

We have been working diligently to serve Alexandrians without heavy costs to the taxpayers, Lawhorne said. Our police officers and deputies used off days and flex hours. Some of those assigned to administrative duties were shifted to help out in this effort.

Both Chief Baker and Sheriff Lawhorne were especially pleased with the combined teams of the citys law enforcement agencies.

The police departments field operations bureau dedicated 13 community support officers, including a detective assigned to the Northern Virginia Regional gang task force and who is also deputized with the U. S. Marshals Service.

From the sheriffs office, 21 deputies, three of whom are deputized with the U.S. Marshals Service were assigned.

Statistics showed that 119 warrants were served during this detailed operation, which was separate and apart from other daily duties of those involved.

Both Chief Baker and Sheriff Lawhorne maintained a hands-on role in the effort.
One of the important aspects of Operation Clean Sweep was that a total of 26 warrants were served after indictments by the citys grand jury while 14 warrants were issued to offenders already jailed in other Virginia facilities. A total of 16 extradition warrants were filed out of state.

According to commanders, one offender surrendered to deputies when a warrant was filed in Waymont, Pa.

Already jailed
The breakdown further showed 10 warrants served on 10 inmates in the Fairfax County jail, five in Prince William, three in Arlington and one in the Virginia Department of Corrections.

Citizens of Alexandria can be proud today knowing that our police officers and sheriffs deputies have worked closely, effectively and determinedly in Operation Clean Sweep, Chief Baker said.