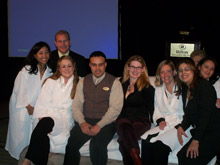 With National Harbor spending $2 billion on its convention hotel and a new Westin going up next door, the Hilton Alexandria Old Town is taking no chances. Recently, it underwent a $4 million makeover to compete for “spillover” hotel rooms when the Gaylord National opens in April, 2008.

The sweeping renovation consisted  of changes which could accomodate a Queen. It includes expansion of its lobby and lobby bar to include mahogany wood floors and three HDTVs located in Seagars Lounge,  the addition of a full service Starbucks in its lobby, Couristan carpet in the ballroom, as well as updated lighting throughout the pre-function and ballroom space.

All guest rooms furniture was renovated to a contemporary design with deep maple solids, maple veneers, brushed nickel accents and glass tops. All rooms received The Bed, a Hilton design concept which replaced all of the hotel’s bedding up to the “ultimate in sleep design,” Brockway said.

In mid April, the hotel held an event for 100 people to showcase its massive renovation and to give away a bed. Christine Yurko of Alexandria won the bed, but was responsible for transporting it home.