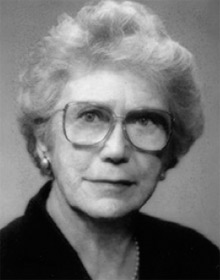 When Catherine Winkler Herman died last week, her family lost a beloved mother, grandmother, and great grandmother. The environment and those in need of health care and education lost a true friend. She was 93 years old.

Friends and family came to the Winkler Botanical Preserve on Wednesday to say goodbye to the woman who gave 44 acres and an endowment of $10 million to make the preserve possible. She was an avid environmentalist, supporting numerous efforts to address global warming and the use of alternative fuels and being an early and active supporter of both the National Conservancy and the Montana Nature Conservancy.

In a partnership with the Alexandria public school system, the Winkler Botanical

Preserve has provided science, environmental and nature education programs for thousands of Northern Virginia school children, as well as special after school programs for hundreds of children in need over the past 15 years.

Born in Wolf Point, Mont., Winkler Herman moved to Washington, D.C. to work for the Commerce Department during World War II. She was a graduate of the University of Washington in Seattle, Washington. After the war, she went back to school and earned her Masters Degree in social work from Howard University, and she worked for many years as a psychiatric social worker.

In 1942 she married Mark Winkler, founder of The Mark Winkler Company, which grew to become one of the largest real estate development companies in the Washington area. The couple had three daughters and were together until his death in 1970. The company was sold in 2006. In 1982 she married Dean Herman, a classmate in her 1931 high school class of 18 students in Wolf Point with whom she had renewed a friendship at their 50th high school reunion in 1981. Dean Herman died in 1996.

Supporting women
During Winkler Hermans career as a psychiatric social worker, she primarily counseled young women, many of whom were single parents. As Catherine counseled these women, she developed a deep empathy for the plight of women who were single parents. She saw that many of them were in dead-end jobs and could not further their education to improve their career opportunities because they had children to support.

As she urged many of these women to return to school as a means of improving their and their childrens lives, she began to understand that not only tuition, but also good, affordable child care were enormous issues. These concerns led her in later years to endow scholarship programs for single mothers in colleges and universities across the country, over the years providing full college scholarships for scores of single mothers.

In conjunction with her desire to help young single parents further their education, Catherine also began exploring the needs of low income families for good, affordable day care. Starting with a series of major grants to the ACCA Child Development Center in Annandale, The Mark and Catherine Winkler Foundation over the past 25 years has been a major supporter of low income daycare projects throughout the Washington area. Related areas of support have included funding to establish Fairfax Countys first reduced fee legal clinic, to establish the Healthy Families program in Alexandria and Fairfax County and to support the Alexandria Women and Childrens Center in the Arlandria area of Alexandria.

Indigent health care and medical research were also a focus for Catherine. She provided major funding for the Northern Virginia Medical Mall Campus, the Visiting Nurse Association Living with Cancer Project and Alexandrias Healthy Kids Partnership. She was a consistent and significant supporter of indigent care at the Washington Hospital Center, Inova Alexandria and Inova Fairfax.

Out of the Attic: Robert Prettyman and Friendship Firehouse’s hose carriage