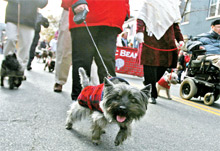 Alexandrias holiday season shifted into high gear last weekend with The Campagna Centers annual Scottish Christmas Walk and all of the festivities that surround it.

The celebration began on Thursday with the Childrens Tea. Around 180 people attended and our three childrens concerts were also well attended, said Karen Hughes, president and CEO of the Campagna Center. While we love holding our events for patrons and adults, The Campagna Center is really all about children and the community and we were so pleased to expand childrens participation in our Scottish Christmas activities.

Most of the celebration was held at the George Washington Masonic Memorial instead of at The Campagna Center. First of all, we have expanded our programs and so had even less room to hold these events than we have in the past, Hughes said. Moving the Taste of Scotland to the Memorial allowed us to double the number of vendors and give each of them more space to display their wares.

Hughes said that nearly 500 people attended Friday nights Taste of Scotland and the vendors did very well. Moving festivities to the Masonic Memorial also allowed The Campagna Center to expand the celebration to include a Celtic concert on Thursday night, which will be bigger and better next year, according to Hughes.

Virginias retiring Republican Senator John Warner and his wife Jeanne were the Grand Marshals. Despite concerns about his health, Warner walked the entire parade and stood at Market Square to watch the various parade participants go by. I think he really enjoyed himself, Hughes said.

Hughes did not know how much money The Campagna Center raised because it is still being counted. I think we did at least as well as we did last year if not better, she said.

She said she was thrilled with the communitys response to holding most of the celebration at the Memorial. We have had a community advisory committee working with us on this event since August, she said. We really want this to be an event that involves the entire community, not just Old Town. By moving many of the events to the Memorial, I think we have done that. Everything really went exceptionally well.