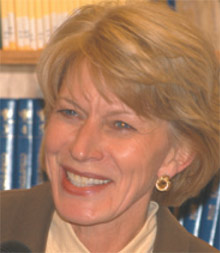 After hours of listening to citizen input on whether to retain or to fire school superintendent Rebecca Perry, the Alexandria School Board remained unchanged in their initial decision on Perrys contract, voting Tuesday night to not retain her after her contract expires in 2008. The vote was 5-4.

Voting against rescinding was Claire Eberwein, Blanche Manness, Arthur Peabody, Scott Newsham and Yvonne Folkerts, although all agreed that the hours of citizen response was greatly appreciated. Folkerts even cried as she went through her reasons to stay with the original decision of not renewing Perrys contract at the end of the school year in 2008. I arrived at my decision as an individual and nothing more, she said. Change can bring progress.

There were more than 50 speakers at the marathon meeting with the anti-Perry camp having a slight majority. Familiar phrases like new direction, better vision, and out of control administration, came from speakers at the podium, while those who wanted to rescind the vote and go through the procedure again filled the room with community input, flawed process, and secret meetings.

After four hours, some people started to leave the room when board member Eileen Rivera made a motion at 11:15 to push the vote up on the agenda. Her motion was seconded and they voted. Board member Sheryl Gorsuch proposed a motion to rescind the original board decision, and readdress the Perry contract issue.

We have more information than we had before, she said. Gorsuch said she received a barrage of emails, and 75 percent of them were to readdress the Perry contract vote. This board needs to listen to the entire community, she said. After the vote, the room emptied quickly even though several items on the agenda hadnt been addressed yet.

John Ladd was for the change of leadership. Its regrettable that the community had to go through this, he said.

David Raney was satisfied with the outcome. Were excited about the opportunity for new leadership, he said.

On the other side, Jeff McQuilkin was pretty disappointed, he said. They just ignored them [speakers], McQuilkin said.

Gina Miller had a feeling before the start of the meeting. It was a done deal before one person made a comment, she said. Miller also wondered how the school system is going to cover the additional expense to hire a new superintendent, which she estimated at $10,000. Wheres the money? she asked.