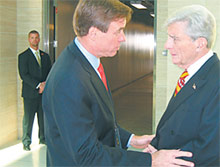 The three-decade career of Sen. John W. Warner (R) will end on Jan. 6, 2009, but the patrician lawmaker will leave  an enduring stamp on the Northern Virginia landscape.

Federal funding of I-66, the build-out of Metro and the Woodrow Wilson Bridge are only a few of the massive public works projects in which Warner had a hand.

Quoting from William Shakespeare and Thomas Jefferson, the 80-year-old Warner announced his retirement from politics Aug. 31 in a speech delivered at the University of Virginia in Charlottesville. Warner began law school there 57 years ago, and it is a place he called hallowed ground.

Whether you be a Republican or Democrat or independent, all of you have joined these many years to enable this humble soul to have a magnificent and very rewarding career in the United States Senate, said Warner, standing before a statue of Jefferson on UVAs north Rotunda.

The senator, who grew up the son of a rural southside Virginia doctor, said he made his decision only days before, with counsel from his wife and three children. He wrote a letter in longhand, titled To my fellow Virginians, which he asked the media to distribute. The five-page letter thanks and praises his teachers, family and constituents in nearly every paragraph.

I thank again all those whove made it possible for this humble individual to have achieved a footnote in Virginia history, Warner said.

Warner, a veteran of World War II and the Korean War,  received his law degree from UVA in 1953 and went on to serve as a secretary of the Navy. Warners legislative focus in recent years has been on national defense and homeland security issues.

Warner won his first bid for elected office in 1978 after losing the GOP primary, but stepped in to fill the electoral slate after party nominee Richard Dick Obenshain was killed in a plane crash during his Senate campaign.

Regional milestones
Some of Warners footnotes were more like milestone contributions to the transportation infrastructure of Northern Virginia.

In 1979 Warners push for federal funding of the final segments of I-66 led to its 1982 completion, connecting the Fairfax suburbs to the Piedmont countryside from McLean to Front Royal.

Throughout his career Warner pushed for increased funding of Metro, which extended the 103-mile system deeper into the Virginia suburbs. He also played a key role in raising the initial funding in the late 1990s to replace the Woodrow Wilson Bridge.

Loads of people in and of Congress had a role in that project, but he properly took credit for it, said Larry Sabato, the UVA political science professor who helped arrange Warners announcement Friday. He was the senior member of Congress who pushed hard and got the most money for it. So he deserves a lot of credit for it.

Sabato called Warner one of the first Northern Virginia senators, with a broad swath of other accomplishments for the region.

Because he lives there, he clearly looked out for Northern Virginia, especially on transportation issues, which he recognized as the main issue, Sabato said. He speaks the language of the Northern Virginia suburbs. He communicated well with [Northern Virginia voters] right from the beginning and it was one of his keys to victory in 1978.

Political pressures
Warner vacating his seat creates a competitive race with a real opportunity for the Democrats, said Mark J. Rozell, a professor at George Mason Universitys School of Public Policy. It is now more likely that former Virginia Gov. Mark Warner will run. It also creates another opportunity for the Democrats in that Rep. Tom Davis will likely relinquish his 11th District House seat to run for the GOP nomination. Davis could have competition for the nomination, with ex-governor Jim Gilmore getting in the race.

By late Friday afternoon, the Virginia Democratic Party had released an e-mail headlined, Tom Davis is no John Warner.

Former Gov. Mark R. Warner, a challenger for Warners seat in 1996, told reporters Sunday at the annual meeting of Southwest Virginia Democrats in Dublin that hell be asking Virginia voters to either help send him back to Richmond or to Washington as a senator.