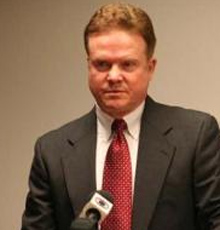 As debate in the Senate continues moving towards confrontation with President Bush over his Iraq policy, Virginia freshman Senator Jim Webb (D) introduced legislation Monday that would limit the Presidents ability to deploy U.S. forces in Iran.

In a speech on the Senate floor, Webb repeatedly said his legislation is intended to reestablish the constitutional balance between the executive and legislative branches.

The purpose of this legislation is to restore a proper balance between the executive and legislative branches when it comes to the commencement of military activities, he said.

Webb repeatedly stated that the President does not have the Constitutional authority to wage war in Iran without congressional consent, tacitly referring to Article 1 Section 8 of the Constitution, which states only Congress has the power to declare war and to raise and support armies.

The major function of this legislation is to prevent this Administration from commencing unprovoked military activities against Iran without the approval of the Congress, he said. The legislation accomplishes this goal through the proper constitutional process of prohibiting all funding for such an endeavor.

The [Constitutional] Conventions participants carefully decided that the president should not be given the power to decide with whom this nation should go to war, he added, or to undertake aggressive actions without the consent of the Congress.

Unlike the current situation in Iraq, where cutting off funds might impede or interrupt ongoing operations, this legislation denies funding that would be necessary to begin such operations against Iran in the first place, he said.

The Bush administration has sent mixed messages on Iran, Webb said, making this legislation a necessity.

When asked if the legislation would send a message to Iran that the U.S. is reluctant to use military force towards them, Webb told reporters Monday afternoon that this is an American issue, not an Iranian one, referring to Presidential actions he believes would amount to a Constitutional infringement.

I was very specific that we are not taking any military options off the table and were not tying the hands of the administration if our men in the region are attacked, he added.