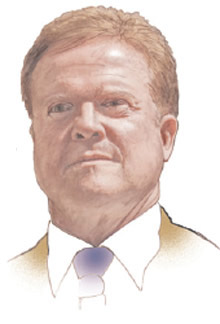 Even though Virginia Senators Jim Webb (D) and John Warner (R) expressed their dissatisfaction with the immigration bill by voting against closing debate this week, a conservative group has the senators in their sites with a new television ad.

The group, Grassfire.org, is a conservative online activist group that staunchly opposed the grand bargain immigration bill that fell 15 votes short of cloture last Thursday. Based out of Hampton Roads, Grassfire has produced a 30-second ad in which an angry white woman asks wheres the fence? while three brown-skinned, presumably Mexican, men scurry across the road in front of her.

Congress and the president want to give amnesty to millions of illegal aliens instead of securing the border, the ad says as headshots of Warner and Webb appear. Call your senators and give them a message: Where’s the fence?

Notably, both Warner and Webb opposed cutting off debate on the bill and both stressed that more work needed to be done to the legislation before a final vote. Both senators also said that a common sense solution to the millions of illegal immigrants that currently reside in the United States must be devised.

Webb said that the solution must protect the American worker and noted that he introduced an amendment that would narrow the number of immigrants eligible for citizenship by requiring them to demonstrate ties to their community. Webb said this amendment creates a fair and workable path to legalization for those who have truly put down roots in this country. That amendment has yet to be considered

Similar to Webb, Warner has yet to take a position on the immigration bill, according to his spokesman John Ullyot. But Warner, like Webb, stressed we must address the millions of undocumented workers who are already in this country in a sound, workable and realistic way.

Both senators also noted the importance of border security.

Securing our borders is essential, Warner said while adding, Outright amnesty is unacceptable.

Gaining control over our porous borders by properly utilizing the assets and legal means now at our disposal is of the utmost importance, Webb said. The lawmaker added that the President needs to enforce the existed laws dealing with illegal immigration.

Jim Webb: Rock star
Yep, you read that right. The Virginia Senator and Alexandria resident is the subject of a feature article in Rolling Stone this week. The piece, entitled Virginia Senator James Webb: Washingtons Most Unlikely Revolutionary, provides an in depth look into Webbs family, military and political history and provides an excellent recap of his 2006 campaign. The issue hits news stands Friday.