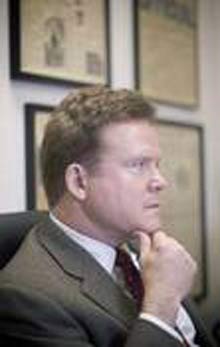 In addition to being among the most well known and recognizable senators, Virginias senators are also among the most affluent, according to financial disclosure reports made public this week.

The reports, filed every year, provide a range of each member of Congress assets rather than an exact net worth. It does not include home values.

Senator John Warner (R), who typically ranks near the top of the Senate, reported between $3.6 and $7.7 million in assets this year. Thats a slight dip from the range of $4.9 and $7.2 million he reported last year, according to the Center for Responsive Politics.

But the real surprise in the Senate this year was Virginias junior senator, Jim Webb (D). Webb reported assets between $2.3 and $7.6 million. According to the report, Webb continues to collect royalties off the sales of his numerous books. His publisher, Broadway Books, plans to reissue Born Fighting this year, which means Webb should earn even more money off his most well known book. Additionally, the publisher plans to release a new book on American politics by the senator this year.

A movie deal for the senator may also be in the works, according to the report. The possible movie project would net Webb $150,000 for the option, $1 million for the screenplay and $250,000 for producing.

Webb also boasts a large and diversified stock portfolio. He has stock in General Electric, Disney, Coco-Cola and Toyota.

The senator posted two additional occupations besides senator and author on the report. He is a contributing editor of Parade Magazine and sits on the Board of Directors of the Bossov Ballet Theatre in Pittsfield, Maine. The theatre was founded by a retired Marine colonel.

Webb says it was his gun
Senator Webb also admitted this week that the gun aide Phillip Thompson was arrested for carrying into the Russell Senate office building belongs to him. Webb told the Richmond Times-Dispatch that he owns the gun, but did not elaborate on why Thompson had the firearm or how it made its way into the Capitol.