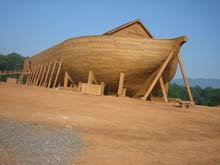 A trip to the multiplex this summer may be a trip to some familiar local vistas. The protagonist of Evan Almighty lives in the Northern Virginia suburbs, the film’s director hails from Falls Church, and some of the scenes were shot last summer around Alexandria and Fairfax County.

The $180 million summer blockbuster — the most expensive comedy film in history — was produced by Universal Pictures and Spyglass Entertainment, and was shot last summer in parts of Northern and central Virginia.  Evan Almighty is one of the largest projects ever shot in Virginia and brought an estimated economic impact of more than $40 million to the commonwealth.  In 2006, the total economic impact of the media production industry in Virginia was $597 million.

Directed by Falls Church native Tom Shadyac, the movie is the sequel to the hit comedy “Bruce Almighty” and stars Steve Carell who reprises the role of newscaster Evan Baxter. Also returning is Morgan Freeman in the role of God.  Other stars include Wanda Sykes, John Goodman and Lauren Graham.

In the film, newscaster Evan Baxter, newly elected to Congress, has moved his family to Northern Virginia where he is contacted by God and instructed to build an ark.  The storyline dictated that a replica of Noahs Ark be built in the Virginia countryside.  The town of Crozet, near Charlottesville, was the site where the production company built the massive ark replica which towered five stories and measured 275 feet in length.

This movie combines live action, exotic animals, intricate make-up, special effects and computer-generated shots, and is one of the first green films ever shot.  Shadyac and his crew were committed to remaining true to the film’s message by treating the local environment responsibly, according to a Universal Studios spokesman.

The production used recycling materials, bicycles rather than gasoline-powered vehicles on the set and planted trees to counteract the negative effects of carbon generated during filming.

Shadyac grew up in Falls Church and graduated from the University of Virginia before going to Los Angeles where he received his masters in film from UCLA.  The youngest person ever to write jokes for Bob Hope, Shadyac went on to write, produce or direct films like Ace Ventura: Pet Detective, The Nutty Professor and Patch Adams.

To learn more about the Virginia destinations where Evan Almighty was filmed, go to www.Virginia.org.